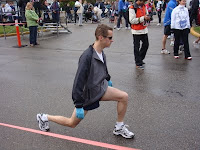 Preparation, if that's the right word, consisted of me only doing one thing different from my weekly running. Hearing somewhere that I should do a 3 hour run 3 weeks before, I did. After 2 hours, I had to loosen my shoelaces 3 times as my feet were swelling up. So I also heard that taking Advil would help. Some say take 1 before the start, others say 2 halfway through, then another 2 at 3/4 distance.
I did a taper of sorts in the week leading up, ate a little more, then really went to town on that old wives' tale and had a huge bowl of beef tortellini the evening before. All the above added up to getting me into the shape below: 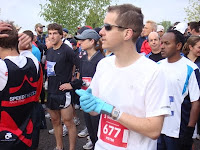 Left home at 5am as the year before. Damp cold this time, so the blue gloves again. My aim was 3hrs 30mins, which would mean matching the previous year's half marathon pace. I found a feature on marathonguide.com called "pace bands", which you can print off after entering your target time. It states what your total time should be at each km, useful tool for anyone wanting to keep a set pace. A-Chang stood on the left of the course, so as to get a head-start on the dash to Starbucks.
One touch lesson I learned for this race: Have a bathroom break before leaving home and at the event start. I only went at the event start, and there was more, erm, left. Even if you don't need to go, take a "CC" to make sure anyway. CC stands for "confidence crap". Once the race was underway, things went well; first km was as expected, way too quick, upon which I dialed the pace down. After about km 4, I felt movement rumblings. Oh s***. As it happened, I had been comfortably going 10-15 seconds per km quicker than goal pace, so had a couple of minutes in hand when I decided at km12 to use the port-a-potty at the roadside drink station. This wasn't going to hold for another 2+ hours, I reasoned, plus the stop is at the bottom of Shaganappi Trail, the course's major (though not all that tough) hill. While doing my business, I knew I wasn't the only one when I heard some loud steps, the next door slam and a muffled "dammit!"

There will be no more problems from here on, was my firm, errant belief. Anyway, up the hill, and past Market Mall for the first time at around km20, the leaders came past the other way, about 8km ahead. 2nd place looked a bit like one of those alien photos with his shaved head and orange compression socks.
It had got pretty quiet by now as the half-ers had long since turned around - there were 3 times as many of them. It was quiet enough to remember a rabbit running across in front of me, giving applause to a steel band, and a high school kid doing violin practice on his front garden as I went past.

Varsity is not a neighborhood I know all that well, and it was here that my feet started to swell. 2 Advil and I felt my feet deflate a bit. After this, and just before Market Mall again, I got to 27km which was the furthest I'd ever run. Only 15 more. "What a bloody long way to run" I said, as the crowd of runners passing Market Mall for the first time in the opposite direction from me got quite thick.

As I descended Shaganappi Trail, last place was coming up it, followed by a police car. Shortly after, I overtook the 2 last placed half-ers, followed by 2 officials on bikes. They were smoking. The 2 runners, that is.  By now, at around km30, my legs were starting to feel empty, running more on momentum than energy. Countdown the bridges. Crowchild. Pedestrian bridge. 14th. 10th. C-train. Prince's Island. Centre Street. Edmonton Trail.

It was between 10th and the c-train bridge, around 30 seconds ahead of schedule that my right hamstring suddenly got shorter and my right foot nearly kicked up into my backside. A few quiet "ouch"s, and straightening it, I hobbled to the roadside. I did several angry stretches, then a deep breath and made myself break out of a too tempting walk. I had to run with my right leg straight, like a clichéd pirate. A couple of hundred meters later, and it just relaxed so normal running could restart. A medic on a bike pulled alongside, "how you doin'?" "Good" I said, somehow smiling at the same time.
Last drink station, and as I drank this last cup of Gatorade, my brain told me that it was going through my stomach and trickling into my muscles. Weird. Must've been part imagination, part muscle fatigue.

With 2km left, I phoned A-Chang. She had apparently won her race to Starbucks, found an armchair, then dozed off. My phone call woke her up. The finish line wouldn't be too crowded by this time though.

I was now roughly 40 seconds behind, so decided I was going to still achieve my aim despite all that had gone before. Now then, some people might say "come on" to themselves or something like that. Not me. No, for some reason my internal mp3 played the end music from Top Gun, voiced over by Yoda telling me, "Do or do not. There is no try." Something in that last Gatorade perhaps.

I overtook a couple of runners at the end, and I recall grunting on the finish straight as I saw the clock.
It was satisfying therefore to have clawed back time lost from mistakes made, something I hadn't done in a running race before. All this at my first attempt at the "king of distance races".
One final tip I acted on was to avoid sitting down straight after finishing. Junk food never tasted so good once I finally did. ﻿
Be sure to check out Peter's blog, A Touch of the Runs!
Posted by RunnerDude at Sunday, October 02, 2011

Congrats! God job! Great timing! I did my first 10K yesterday and I can barely walk today. How are you feeling? Thanks for the inspration...