Runner of the Week: Jeff 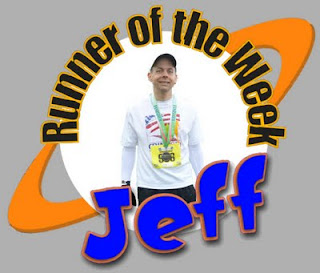 It's been a while since I've featured a Runner of the Week. I'm happy to return the feature with an awesome runner and person, Jeff Williams. Some of you blog readers may know him better at Detroit Runner host of the blog of the same name.. Jeff is pretty new to the fitness world. He started exercising for the very first time in 2009. In about 2 years, Jeff has done a 360 with his fitness and health. Read on to learn more about Jeff "Detroit Runner" Williams and his running and fitness quest...

Over two years ago I went to get a medical exam for my life insurance.  The insurance company put me in a high risk category.  I didn't like it!  It also didn't help that I was turning 40 as well.  So I decided that I needed to do something about it.  My life had been work, come home, eat dinner and snack...and snack....and, yes, you guessed it, snack.  Then I went to bed.  There was really no physical exercise in my life.  Unfortunately what that did was increased my weight to about 195 pounds(I'm only 5' 6") and gave me high cholesterol(280!!!).  I knew I needed to do something about it so I bought myself a pair of running shoes, started walking and started eating healthy.  I walked for probably five months and lost about 30 pounds but could lose no more.  Then I started to lift weights which really did help get me fit but I was not losing weight.  So I thought, I'll start running!

I started by trying it on the treadmill but I could not figure out what was wrong.  I would run but I would just get too tired after a minute and have to start walking again.  I took things outside but the same thing happened and I could not do it.  I talked to my brother-in-law who is a doctor and a runner and he said "slow down!".  That was it, it helped tremendously!  I was just going too fast and losing energy too quick.  My first run was about six houses long.  Haha!  I remember huffing and puffing out there.  Each day I would go out for a walk and try to run one additional home.  I kept doing that until I could get through a block, then two blocks, then my subdivision street until I could get to a point where I could run for 30 minutes at a time and so on.  As I progressed I also lost the weight really fast and by the time I was nine months into the start of my exercising, I signed up for my first 5k and had lost 65 pounds and reduced me cholesterol to 140 points!  I have since put on about 5 pounds but have managed to keep the weight off since I started two years ago.

My wife was very supportive and we purchased an American Heart Association cookbook which my wife uses daily for our meals.  The racing is what really did it for me.  I loved it!  It kept my interest and gave me goals to work on.  I felt incredible every time I finished a race even if it was not my best race.  I wanted to PR every time.  Haha!  Crazy, I know.  I moved through the 5k to the half marathon in about seven months and raised almost $3,000 for a local hospital for my first half as well.  I figured if I'm going to do a half marathon, I might as well do some good for others at the same time.  It also secretly helped keep me motivated because there was no way I was going to tell people that donated money that I did not finish the race. 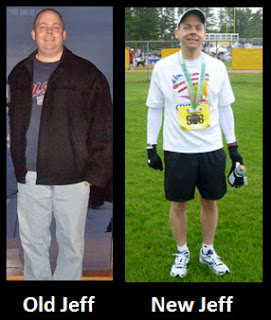 I did not realize it at the time, but I was actually pretty good at running.  I did my first half marathon(which was hilly!) in 1:45:55.  Not super speedy but very respectable.  I have since run four 5k's, four 10k's, three 10 mile runs and three half marathons.  I also did my first full marathon in May(Bayshore Marathon in Traverse City, Michigan) with my running buddy with a time of 4:12:17 less than two years after I started exercising and I'm currently training for my second marathon, the Detroit Free Press marathon in October.

Running has completely changed my life.  Also, my family has helped support me throughout the process.  In addition, the running community and the many blogs I read are great sources of motivation.  Blogging about my progress also helps me - kind of like therapy.  I love talking about running with other runners and my blog (www.detroitrunner.com) is a great place to do that.  Runners are very supportive of each other and I have met some great people over the last couple years.  I hope to be able to run for the foreseeable future and I do what I can get other other people involved in the sport.

Thanks Jeff for sharing your story! Be sure to check out Jeff's blog Detroit Runner!
Posted by RunnerDude at Friday, July 29, 2011

Inspiring! Thanks for posting the interview...and best of wishes to Jeff in the coming years.