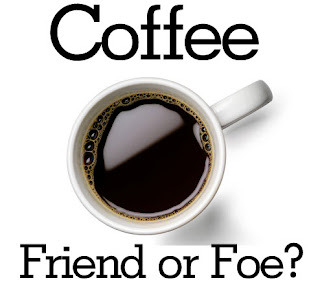 Many a runner swear that downing a cup-a-Joe before running helps performance. I too am a coffee aficionado and you probably wouldn't want to be around me before I've had my morning cup. So I did a little digging into coffee and running. Turns out coffee's not the villain it's sometimes made out to be..

A Running Times article shares a couple different theories on the subject. Basically it says that some experts believe caffeine improves endurance by increasing the enzyme activity for fat metabolism. By using more fat, a long-distance runner's glycogen stores last longer allowing him/her to run farther. But caffeine also seems to help runners of shorter distances. So what's the deal? Other experts credit the enhanced performance on caffeine's stimulation of the central nervous system, which increases alertness and concentration. One pretty cool study even shows that stimulation of the central nervous system can effect the perception of effort. So, drinking that cup of coffee may make that faster pace you're running after your morning coffee seem easier than a on day you didn't have your java infusion.

The experts do warn, however that you should only consider using caffeine if you're already in good shape, eat a good diet, and don't have any medical problems such as high blood pressure. If you're a sedentary person, downing a coffee tanker before rolling off the couch probably isn't going to make you the next Prefontaine.

Now, having said all of that, the upside of coffee for runners, doesn't mean you get to lose all common sense when you're in line at Starbucks before meeting your buddies for that morning run.

I often stand in awe at my local Starbucks as I hear customers shout their orders in what seems like a different language while the talented baristas absorb it all and fill the orders pronto at lightening speed.  Sometimes I get tickled at the orders. It's almost like the customer is either trying to sound the most impressive or trying to stump the barista. Then there are other orders in which I just shake my head, because of the number of fat grams and calories it must contain.

There lies the key, moderation. It's fine to splurge once in a while on a "dessert" type coffee, but I'm at my Starbucks most mornings and I see the same people order the same drinks topped with whipped cream morning after morning. I'm a basic bold coffee kind of guy. I usually add a tiny bit of cream, but that's it.  Actually, I'm so predictable with my order, that Mark (the barista) usually has my order ready by the time I get to the counter without me even telling him what I want.

Recently I noticed a pamphlet by the cream station in my Starbucks titled "Nutrition by the Cup." I was fascinated by its contents—nutrition info for the various types of coffee drinks. A basic black coffee has only 5 calories. Add a serving of half-n-half (about 1Tbsp.) and you add about 18 calories and about 1.5 grams of fat. Not too bad. Add one pump of flavored syrup and you've added 20 calories. How about some chocolate drizzle? (5 more calories). Not into chocolate? How about some caramel? (15 calories). How about some sweetened whipped cream? (short = 50 cals/5g fat; tall = 60 cals/6g fat; grande/venti = 70cals/9g fat). Feeling all "healthy" and want to add some protein powder? (30 calories)

This info made me think of some of those drink orders (that I can't pronounce) that had at least 4 things added to them. Depending on the order, there could have been 100+ calories added to that simple 5 calorie cup of coffee.

So, enjoy the caffeine and get that boost for your run, but be mindful of the empty calories and extra fat that may actually slow you down on the run.
Posted by RunnerDude at Thursday, July 28, 2011

Great article man! I'm with you - caffeine is a definite performance enhancer and coffee is one of the best ways to get it. But a White Chocolate Mocha from Starbucks isn't coffee, it's dessert. With all that sugar, you'd need to run for almost an hour for the Venti. Scary...

The times I have had one of the super coffee's with all the bells and whistles I was left with a sugar crash. I'm just not used to all the sugar so just plain old coffee for me now. I stick mainly to green and white tea, but do enjoy coffee as well. It can definitely put a pep in your step when it's time for a morning track workout or whatever else.

I went from being a 2-a-day Starbucks foo foo drink drinker to once a week. It really has not made much of a difference in my weight. But with regular black coffee, I do feel the extra jolt of energy when I do need it. Minus Hammer Nutrition suggests we limit coffee a week before races. Ugh. http://alturl.com/vfrbb

Hey Running in Boise!
That's probably so you'll drink more of their Heed. That stuff is Nasty!

Thought I was then only person who said Wee Doggie! LOL! Awesome!

Thanks for talking about my favorite drink. I often whip out of bed for a 5 k and the only thing I need is my coffee before I go, especially if I need to just get out there to get it done.
I have also heard that coffee drinkers reduce their chances for diabetes in some studies! That of course would be as you said, with thoughts as to what we are putting in our coffee.
since I turned 30 (7yrsago) I have found that I need to watch when I drink it, or I may be up all night. I have pretty much cut out sugar from my coffee. I do like a bit of fatfree flavored creamo still, but I put a minimal amount in with the rest as nonfat milk.
Great blog!