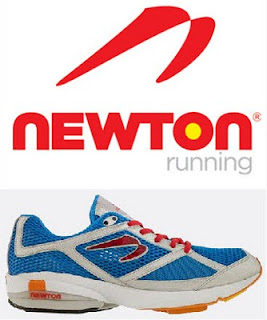 Back in July, Newton Running sent me a pair of their Neutral Performance Trainers—the Gravity—to test out and review. I've tried to provide information on a wide variety of running styles (i.e., Chi Running, barefoot running, Vibram Five Fingers) on the blog, so I was eager to get the Newtons and give them a test drive. I've read a lot about Newton, but had not yet had the opportunity to run in them . I was psyched!

The Newton website, promises a lot for what the neutral performance trainer will do for a runner. I'm always a little wary when so much is promised. "Newton Running's top-of-the-line neutral performance trainer is the ultimate shoe for Natural Running. Get a fast, flexible ride with greater energy return and less impact. The 2010 model has enhanced durability in the heel, a new high-rebound midsole material and improved upper fit. This shoe allows you to run naturally — faster with greater efficiency and less overuse injuries (like achilles tendonitis and plantar fasciitis)." But in this case what was promised was delivered.
The neutral performance trainer is recommended for any distance. I wanted to test something that I could use on a regular basis for training runs, so this shoe seemed to be the best fit for me. The first thing that strikes you when you see a pair of Newtons for the first time are the huge lugs running across the bottom of the midfoot where the ball of the foot would be located. This is a part of the Newton technology or what they call the Action/Reaction Technology™.
- 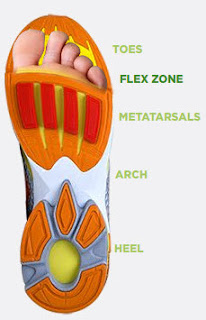 The technology is based on Sir Isaac Newton's Third Law of Motion: "For every Action, there is an equal and opposite reaction." You see the large lugs act as levers and shock absorbers that return energy back to you as you run. The key to the Newton is that you land with a midfoot or forefoot strike instead of landing on the heel first. Newton calls this a Land-Lever-Lift motion. This causes continuous muscle activation instead of a start/stop action that's caused by the breaking effect when you heel strike.
-
I've tend to have more of a midfoot strike, so adjusting to the Newton's did not take very long. But Newton does a great job of letting new Newton runners know that they should ease into running in their Newtons, especially if they've been a heel striker. You'll be activating some muscles that you may not have used much when heel striking or you may just be using them in a slightly different way. Anytime you recruit new muscle activation, there's a period of acclimation. Newton recommends not running more than about 1.5 miles in your new shoes the first time. Then you should gradually add a little more mileage with each run. Also, be aware that Newtons tend to run about a 1/2-size smaller than your regular running shoe. So, for example, if you normally wear a 9.5, it's probably a good idea to order a 10 in a Newton.
-

My experience running in Newtons has been great. The shoes are amazingly light (only about 9.5oz). The energy return was very noticeable. I felt very refreshed after my runs. I have something called Morton's Neuroma in my right foot, which is basically a problem with a nerve hitting a bone when I'm on the ball of my foot. With a metatarsal pad placed just behind the ball of my foot, I can run with no problem. Because of this issue, however, I've never been able to run barefoot. With the Newtons, I was able to use my metatarsal pad and still reap many of the benefits of barefoot running. For performance and delivering on it's promise, the Newton Gravity gets 5 Dudes out of 5 Dudes on the RunnerDude rating scale.
-
At first I was a little put off by the $175 price tag for the Gravity's that I tested, but then I discovered that the average runner can track close to 1000 miles on one pair of Newtons. So, you could buy two pairs of $100 or $125 traditional running shoes or just one pair of Newtons for $150 to $175 during that same time period. -

NEWTON NIGHT!
If you live in the Triad area (Greensboro, High Point, Winston-Salem, NC) then check out a pair of Newtons at our awesome local running store Off'n Running Sports located at 2201 Joan Ave in Greensboro (just off Lawndale). This Tuesday (October 5th) from 6-8PM will be Newton Night at Off'n Running. A Newton rep will be at the store to teach you about Newton shoes and how to run in them. Participants in Newton Night will receive a 15% discount on Newton shoes!! I told you Off'n Running Sports was great!

Note: Although Newton Running sent me a pair of the Gravity shoes and asked me to test and review the shoes, I was in no way urged to write a positive reveiw, nor was I paid or compensated in any other way for writing the reveiw. My review is purely based on my own personal experience using the product.
Posted by RunnerDude at Monday, October 04, 2010

Thanks for the great review. I'm going to be switching to newtons and it was good to see a review like this. Really enjoyed it.

I worry that with the pads on the bottom it will feel a little weird at first. Did they take some getting used to?

I agree with the "5 Dudes" rating. I've been a huge advocate of Newtons since I shifted to them after I'd developed a tibial stress fracture last year in my former 'conventional' (i.e. Brooks Adrenaline) stability shoes, and have since achieved a number of P.R.s which I attribute both to the Newton's encouraged efficient mid-foot landing form and improved training. Ryan - I didn't find the pads to be weird at all; suggest you go for a trial run in a pair to see for yourself!

Hi Ryan! Good Question. Walking in them did feel a little odd, but once I got to running, they really felt fine. Once you're running the shock absorbing aspect of the lugs kick in and you really don't notice them like you think you would.

Thanks for the information. I was thinking that the time to invest in another pair of shoes should be approaching. This kind of stuff is good to know. You the man.

Hey RunnerDude.
The Newton Rep was at the store last night and he said another reason for the high price is the average runner can track close to 1000 miles on one pair of Newtons.
So, you could buy two pairs of $100 or $125 runner shoes or just one pair of Newtons for $150 to $175.
Talk soon, Em

Hi Em! That's good to know. I did not know that about the extra mileage. I'll go back and add the to the post. Thanks!

Thanks for a great review. I've heard lots about Newtons, still doesn't sound like my minda thing. There seems to be a little too much heel, a little less and it would be great.

Hi Boris! If you have the chance, try a pair on. The foot bed is actually lower than what looks like is the heel on the outside. With my experience in the Newtons, I landed mid/fore foot and then my hill hit for just a millisecond. I think the heel's designed more for rebound. It helps foster more enegy return. It's not really designed for cushion, because you're not landing on it first.