Pick It Up With A Tempo! 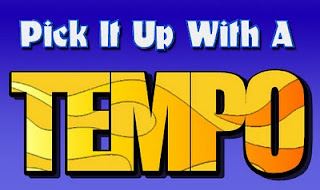 Mixing it up is the best way to keep your running fresh, increase your endurance and up your speed. Hill repeats, track intervals, tempo runs, and your long runs are great ways to mix up your weekly workouts. If you're not training for a particular race, I recommend having 2 quality workouts a week. If you're training for a half- or full-marathon you can up to to three. Quality workouts are workouts (like previously mentioned) that either increase the intensity or distance. Then the rest of your weekly runs should be easy-effort runs designed for building and or maintaining your base mileage. It's best to have at least one complete rest day in the week. I usually like to have my rest day the day after my long run.
So, mixing up your weekly workouts is a great idea, but you can also mix up the type of tempo runs your running. Running the same old 4- or 5-mile tempo run can get boring week after week. In case you're new to running, a tempo run typically begins and ends with a 1-mile easy warm-up and cool-down mile. The "middle miles" are run at tempo pace (typically 30 seconds slower than your 10K or 5K  race pace). So for a 4-mile tempo run, you'll run 1-mile easy, 2-miles at tempo pace, and 1 mile easy for the cool-down. But....that's just one way to do a tempo run.

Basically, a tempo run's purpose is designed to give your body experience running fast for longer periods of time. This helps increase your speed and endurance. It's also great for pushing out your lactate threshold. That's the point at which you begin to find that "burn" in your muscles. That burn is caused when you increase your pace faster than your body is acclimated to and the body isn't able to clear out the lactate (a by product of the energy produced for muscle movement) fast enough. But, if you keep exposing yourself to faster paces over longer distances, you can actually push out the point at which you get that burn (or the lactate threshold) so hopefully you'll never experience it during a race.

Other types of tempo runs include Tempo Intervals, Race-Pace Tempo Runs and Kenyan Outbacks. Tempo intervals are very similar to fartleks (bursts of speed during a regular run). To do a Tempo Interval, simply divide your run into 10 minute intervals rotating between slow and tempo-pace intervals. So for example, if you're running a 6-miler, begin with 10-minutes at an easy conversational pace for 10-minutes. Then ramp it up to your tempo pace for 10-minutes. Continue this until you've completed your 6-miles. The last interval may actually be shorter than 10-minutes depending on your pace. Or if it's easier, don't base the Tempo Interval run on mileage. Instead, just plan on running for 60 minutes doing 6 slow/fast intervals.


Race-Pace Tempo runs are run just like a regular Tempo Run beginning with a 1-mile warm-up at the beginning and a 1-mile cool-down at the end, but instead of running the "middle miles at a pace that's 30-seconds slower than your 10K or 5K pace, run it at your actual race pace. If you're training for a 5K or 10K, then this give you a chance to ramp up your speed so your body knows what it feels like to run at the faster race pace. If you're training for a half- or full-marathon, then this lets your slow it down a bit and get a feel for what it's like to run at your endurance run race pace.

Kenyan Outbacks are similar to tempo runs, but with the second half much faster than the first. To do a Kenyan Outback, pick an out-n-back route. Run the "out" portion at a moderate pace and run the "back" portion about 30-45 seconds slower than 5K pace. This helps your body learn to "kick-it-in" or "pick-it-up" later in a race.

Mixing up your runs throughout the week not only helps keep your workouts fresher and more interesting, it also jacks up your metabolism and increases your caloric burn, keeping you fitter and leaner. It also gives your body a chance to use more than one energy-production system. Track intervals use more of the phosphagen system (the quickest and most powerful source of energy for muscle movement) and the glycolytic energy system. Tempo runs will make use of the of glycolytic system and the oxidative systems of energy  production. The long run will begin with the glycolytic system but it will mainly make use of the oxidative system. During a long run, you body can also learn to burn fat for energy production. Allowing your body to experience using all the various energy-production systems, makes you a more efficient runner.
Posted by RunnerDude at Thursday, October 07, 2010

Great post! I'm scheduled to do my tempo run tonight =)