Benefits of Running As You Age? You Bet! 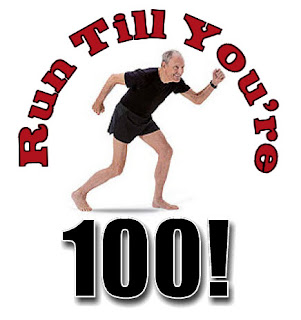 Well, my oldest child turned 19 this past weekend and I'm feeling kind of old. Of course my three kids (10, 15, and 19) consistently remind me that I'll be half a century in 5 years. LOL! Kids gotta love em, right? The other day, my son (who is now taller than me) was counting the gray hairs sprouting on top of my head. I believe there are at least 19 (one for each year of his life). These white hairs all seem to be clumped on the crown of my head, just out of reach to easily pluck (believe me I've tried).

The other day I was getting my hair cut and the lady cutting my hair, said in a high-pitched voice, "Oh look everyone! An Angel Lick!" For a second I thought this lady had gone loopy and had see an angel figure in the hair that had fallen on the floor or something and wanted to take a picture of it to sell on eBay. But no, she was referring to the white hairs on the top of my head. She said when they clumped like that, it's called an "Angel Lick." Lucky me. Most people have a guardian angel. I just get licked by one.
Well, I may be getting older, I guess we all are, but I feel like I'm in the best shape of my life. I'm definitely more fit than when I was in my 20s. I think it has to do with running. You know, people are spending thousands of dollars on Human Growth Hormone injections because that's supposed to be the new fountain of youth. And, research has shown that HGH does help stop cell degeneration and destruction. Have you ever seen that ad with the guy in his 60s or 70s with the body like Arnold? Not sure if that picture's doctored or not, but HGH is what he's supposed to be taking. Well, I don't want a body-builder body when I'm 70, but I do want to stay healthy and fit as I get older.
Guess what! If you're a runner and a runner who does intervals, hill work, or some resistance training, you're actually producing human growth hormone and it's free! Women produce more than men, but along with testosterone, men also produce human growth hormone. Not only does HGH help fight cell degeneration, it also helps counteract the effects of cortisol. If you only run long, slow, steady miles your body can release cortisol which can eat away at your muscle mass. But testosterone and HGH produced through highly intense workouts like intervals, tempo runs, fartleks, hill work, and weight or resistance training helps to counteract the cortisol, keeping your muscle mass intact. Running has a whole host of other benefits too.
-
People who run tend to...
And, it's not too late! Just because you're in your 40s, 50s, 60s, 70s or beyond, doesn't mean it's too late to take up running. If you haven't exercised for some time, you'll need to get your doctor's clearance and approval, but after that you're good to go. Find a running club or a beginning running group in your area (In Greensboro, NC give me a call or check out the website.) Being in a supportive group when you take up running for the first time can make a big difference in your success. Doesn't have to be a formal training group. It can just be a group of your friends.
-
No matter the method you adopt, start out slowly maybe with a walk/run format. Walking more at first and then gradually adding in some short runs. Eventually you'll be running more than walking and before you know it you'll be running a 5K or something! I read all the time about individuals who took up running for the first time in their 50s or 60s and are now running marathons in their 70s! Take Grannie Annie (Ann Singer) for example. At age 50, overweight, under exercised, and wondering what she was going to do with the second half of her life until age 100, she decided to start walking. It wasn't long before she took up running. By age 65 she had run at least one marathon in each of the 50 states! In total she's run over 70 marathons! Ann may be the exception, but she sure is motivation to keep active. Go Annie!
Okay, I've talked myself out of feeling old. I'm 45 and I've run 10 marathons and in training for my 11th. I've run dozens of 5K, 10Ks, half-marathons and other race distances and I plan on living to 100 like Annie, so , Wow! I'm just a babe in the woods with my running.
I do have to admit that the 19 years of my son growing up just flew by. No more tying up the hallway with an entire container of dental floss making a web being Spiderman. No more making a maze of connect-the-dots on the kitchen floor with a permanent marker. No more painting the backyard fence with a rainbow assortment of enamel paints just to see what it would look like. No more digging a hole in the side yard and covering it with leaves to "catch a deer" only to catch his uncle instead. No more telling his little sister that she was adopted (which she wasn't).
Oh, I'm sure there's more adventure on the horizon for the next 55 years, right?
Posted by RunnerDude at Monday, August 16, 2010

Yet again... you kick my rear and tell me I need to be doing intervals and hill workouts. Ok, ok, ok... I'll stop just going for slow, steady distance. (And btw, I'm in my 30s, and I've already been licked by that same blasted angel... I wish she'd leave me alone.)

My oldest daughter starts college next week! I'll hit the half-century mark next summer, and I'm determined to finish my forties the way I started nine years ago - by running a marathon under four hours.

Blogs like this have been a terrific encouragement for this old Clydesdale!

Great post! On the mental acuity benefit of running this is the major focus of Harvard's Dr. John Ratey, and his book "Spark". On Runners Round Table episode 73 we'd interviewed emergency room physician, and host of Brain Science Podcast, Dr. Ginger Campbell, who had much to add from her interview of Dr. Ratey, including the rate of brain-derived-neurotrophic-factor(AKA "miracle grow for the brain") production being tied to our cardio activities - including running intervals, speed-work, hills, playing a long exhausting point in tennis, etc.

Thad - great post and I agree. I'm 40 and in the best shape of my life. What I find inspiring are all the role models I'm surrounded by - men and women 10-20 years older then me who can run circles around me. The only place to go is up!

Great! Just started running about 3 months ago. I have a 5k race in about a month - it's sites like yours that give me a lot of good information.

Hi Andrew!! Best of luck on your 5K! Welcome to the blog!

Great post! There are many poster "children" out there to support your statements. (I am one of them at age 54).

I'm very disappointed at races that don't publish age graded results...8( Please help me in my quest to fix this.