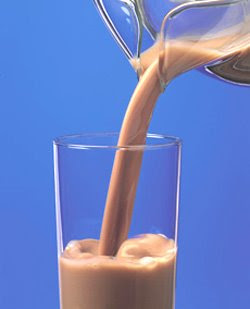 Recent research shows that drinking chocolate milk helps athletes recover from strenuous exercise just as good as sports drinks like Gatorade. The findings help dispell the idea that high-tech supplements are better than whole foods when it comes to athletic performance.
Sports drinks do a great job of providing carbs, fluids and electrolytes that athletes lose through sweat. Chocolate milk does that too, but it also has protein that researchers say helps speed-up muscle recovery time. Researcher, Joel Stager, Ph.D. of Indiana University says that chocolate milk has an optimal ratio of carbohydrates to protein to help refuel tired muscles. In addition to the protein, milk also provides calcium and Vitamin D which are key in building strong bones.
And if that's not enough to get you to down a glass of chocolate milk after your next run, keep in mind that Michael Phelps drank chocolate Carnation Instant Breakfast in between races during the 2004 Olympics. Check out the video clip below about Michael Phelps in the 2008 Olympics. He's using a more high-tech recovery drink, but Men's Health Magazine mentions that you can get basically the same benefits from 1% chocolate milk.

Visit msnbc.com for Breaking News, World News, and News about the Economy

Chocolate milk is certainly less expensive than the other products on the market. I will give this a try after my next long run!

I agree man, plus it tastes a heck of a lot better too!

Chocolate milk rocks after a run...

I picked up one of those individual serving plastic bottles of lowfat chocoalte milk and drank it after my long run this morning. I did taste good. I was a little worried about drinking dairy after a run, but I had absolutely no problems!

I downed a huge glass of chocolate soy milk after today's run. Does that count?

Hey Dena! Looking good on your 18-miler today! From what I can tell, chocolate soy milk has a tad less protein than regular milk, but the ratio of carbs to protein is basically that same as in regular milk. So, I think you're good to go.

I love chocolate milk after a run! I never thought of it until someone told me and now I'm a convert!

I've been so ahead of the curve, i have to tell you. My longtime bicycling buddy always made fun of me for buying an individual low-fat chocolate milk drink on our long bike trips. But it's protein and sugar in one easy to down drink. Glad Michael Phelps has followed my lead.

Hey Lisa! You've always been ahead of the curve! I think Phelps did give you credit in an aritcle I read. :-) Be sure to talk a jug of chocolate milk with you to Boston!