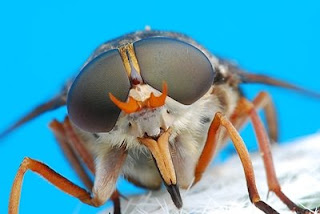 One of the most annoying things about summer running, for me anyways, is the pesky bugs. Because I sweat so much, I usually end up running shirtless (otherwise I'd be running with an extra pound or two). Problem is the glistening sweat on my back works as a natural bug attractor. I might as well be a strip of fly tape running down the greenway. If there's a horsefly to be found, you can bet its' hovering around me. There is one strip of the greenway I run that's home to one such horsefly. The dang thing must be 10 years old, because every year in that very same stretch, I get hounded by that horsefly, or one of its descendants all of which must have the same genetic trait—the pester RunnerDude trait.
I've discovered that it's a must to have gel-free hair on a run. So I've had to give up my stylish coiffed do's. Oh, the sacrifices a r

unner must make for his craft. A gel-free head helps but so

me of those lil buggers still persist. So, I've finally resulted to using bug spray. I've discovered there's an entire line of water-resistant bug sprays for the sports enthusiast. After trying several brands, I've discovered that I like Cutter's Backwoods Water-Resistant Sports Formula (unscented) and Cutter's Advanced Sports Formula the best. I usually use Cutter's insect repellent if I'm running in the early morning or late afternoon when I'm not concerned about over exposure to the sun. I've discovered that BullFrog has an insect repellent/sunscreen combo in its Mosquito Coast brand that's good to use if I'm running later in the morning or in the early afternoon. If you just need a good sports sunscreen without the bug repellent, BullFrog's Marathon Mist works really well.
Posted by RunnerDude at Tuesday, April 28, 2009

Good stuff.. I'll have to pick up some. It's always good to have reminders to use bug spray.

Hey Flyers26! Let me know how they work for you. They're are lots of other brands but most have a really potent smell to them. Thanks for the feedback!

Definitely good recommendations; we don't have as big of a horsefly problem where I am in MD but we sure do have gnats and mosquitoes. If you know any tricks to not swallow bugs, that would be great! Took in my first one the other day, gross.

Hey Natalie Friton! I know what you mean. And if you're a talker like me when you run, it can be a big problem. A couple of years ago, a bee flew in my mouth and stung me on the roof of my mouth! OUCH!! Luckily I had others with me, but there was nothing to do but run back to the car which was about 2.5 miles. I didn't have an alergic respiratory reaction, but my neck, mouth, and ear did swell. The doc gavae a super doze of shome kind of antihistamine. Never dull on the run. At least with me anyways. LOL!!

I've heard that listerine soaked bandanas also do the trick. Haven't ever tried it though. Thad, that horsefly must get bored when you're not in the greenway and come after me. Dive-bomb!! I make sure to wear sunglasses even when it's shady or cloudy. Bugs in the eye are quite painful