On the previous blog poll regarding your favorite brand of running shoe, no one brand surfaced as the most popular. Nike, Adidas, Asics, Brooks, and Saucony were all equally represented. If you’re like me, you’ve probably tried an array of different running shoes and brands of running shoes. About 15 years ago I was a Brooks fan, then did a few years with Adidas, then Mizuno and Saucony. Each time I found a shoe that worked, the company would do an "upgrade" and make modifications to the shoe or just discontinue it alltogether. Very Frustrating because rarely ever does the newer version seem to work for me like the original. Then there was the whole thing with me wearing the wrong type of shoe. Many years ago, I had my feet evaluated at a running store in and was told I needed stability shoes because I over pronated. Then about 2 years ago, during a visit with the sports doc about a running-related injury, I was told I had a neutral gate and didn’t need stability shoes. He told me that what I needed was a good cushioned shoe (my feet have very little natural pa 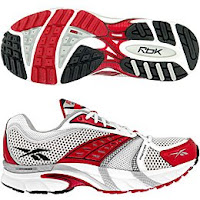 dding). The doc also told me that I should always replace the flimsy insoles that come in the shoes with a ones that have more cushioning. I found that the Sof-Sole Adapt Custom Insole works really well. You actually stick them in the oven for about 2 minutes. Then, while still warm, you pop them in your shoes, slide your feet in, and the insoles mold to the contour or your feet. I’ve recently changed to Reebok’s Premiere Verona because I needed new shoes and it was given good reviews by Runner’s World for value and cushioning. Plus they were pretty cheap! $69.95 online at Holabird Sports. So far, so good. What shoes work for you?
Posted by RunnerDude at Thursday, November 20, 2008

Nice article. I'm a big fan of the Stability-prone Brooks Adreneline GTS-8 shoes. I have an indoor pair and outdoor pair for which I track the milage on them. So far, their upgrades have been fine.

Nice article..! I will try to get that sof-sole adapt custom insole for my new running shoes.

Thanks! I've found replacing the insolse really help. They also help extend the life of the shoe a little too. Let me know what you think of the sof-sole adapt custom insole. I've had a good experience with them.