RunTheBoro: A Field Trip for Runners One of my runners, Rochelle Cook, described the annual Greensboro running event RunTheBoro as "a field trip for runners." It's ironic that the birth of RunTheBoro actually started with a field trip. One day back in April of 2016 (actually it was April Fool's Day), I found myself with a free half day (which is extremely rare). So I took a field trip to Raleigh to a check out a running store I had heard about, Runologie. They had some great T-shirts. One shirt that caught my eye had "Greenway City" printed on the front.  Raleigh has one of the best greenway systems in the country with over 117 miles. The Greenway City shirt was celebrating that awesome network of greenway. Greensboro also has an awesome network of greenways and trails, over 90 miles! 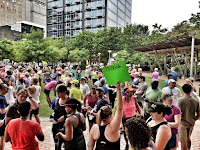 That trip got me thinking that we (Greensboro) needed a shirt to celebrate our great running city. Not just the greenways, but the whole city. There are lots of awesome neighborhoods, including the downtown area, in addition to our vast network of greenways that are great for running. So, when I got back home, I started designing a graphic for the shirts. I used a photograph I had taken of the skyline of Greensboro to help me create a silhouette of the skyline. While working on the graphic, the phrase "Run The Boro" came to mind and it stuck and I added that phrase to the shilhouette. 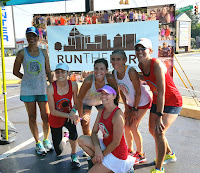 It's funny how things evolve. Initially, I thought I'd sell the t-shirts and use part of the proceeds to help fund the Greenway Water Fund. In 2012, RunnerDude's Fitness began putting water coolers out in four spots on the Atlantic & Yadkin Greenway each Saturday. We put out about 10,000 bottles of water and Gatorade each year. We recycle all the bottles that are placed in the recycle bags with each cooler. The shirts seemed like a great way to celebrate Greensboro's awesome  running community and help continue the weekly water cooler service on the greenway.

During the process of getting the T-shirts printed, I had the epiphany for a series of runs during May and June getting runners into these cool areas of our city. What better name to call the series than RunTheBoro! I wanted the runs to be free and the shirts would be optional to buy. Two separate ideas that serve the same purpose...bringing runners together and exploring our great city. Idea conceived on April 1st. Shirts printed on April 20th. Runs announced on April 27. First run on May 7th. Quite the whirlwind. 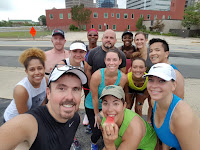 That first run was just one run distance of 7 miles. We explored the Kirkwood, Latham Park, and Old Irving Park neighborhoods. I thought mainly my runners would show for that first run, possibly 30-40 runners, but we had over 75! Each week the numbers grew and we averaged about 110 runners for each run. After that first run, I began offering 2 distances, a 4-5 mile and an 8-10 mile route. This helped increase walker participation. For the last run of 2016's RunTheBoro, we had about 175 runners participate. Overall, for the event, we had over 300 total participants. It was awesome.

RunTheBoro 2018 surpassed my wildest dreams! We averaged 275 runners for each run and had over 600 total participants! Run #9 (the last Saturday run of RunTheBoro 2018) had over 330 runners! It was amazing!

Then in 2019 we grew even more! In 2019 we averaged 350 runners per run with the largest run attendance being 400! RunTheBoro 2019 drew in over 700 unique runners and walkers! The walking group really grew tremendously averaging around 70 each week! 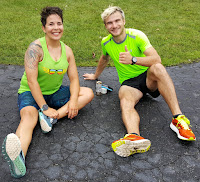 RunTheBoro 2020 will continue the newsletter, theme-based runs (there are several new murals to add to this year's City of Murals run!) and returning title sponsor Volvo Financial in conjunction with RunnerDude's Fitness will be providing a brand new pint glass this year for those runners that participate in 5 or more Saturday RunTheBoro runs! WeeDoggie!