Enter to Win a Free Pair of Saucony's!

If you're a neutral runner or an over-pronator, Saucony has two shoes just for you! The Saucony Triumph and Hurricane are not new shoes, but they been updated the past few year making them evern better than ever.

Check out the specs on both shoes below, then at the bottom of the post enter for a chance to win a free pair of Hurricanes or a free pair of Triumphs! 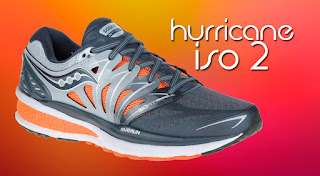 The Saucony Hurrican ISO2 with EverRun was recently named "Editor's Choice" by Runner's World in the 2016 Spring Shoe Guide.

This is the second Runner’s World award for the brand’s flagship supportive running shoe: The inaugural Hurricane ISO was named “Best Update” in the Runner's World 2015 Summer Shoe Guide.

“The newest version of the Hurricane combines all of Saucony’s technologies to create a ride that is comfy, cushioned, responsive, and stable,” said the Runner’s World review of the shoe. Testers’ highest praise was reserved for the fit and comfort of the well-padded, two-layer upper that hugs the heel and midfoot while providing plenty of room up front for your toes. New for this version are layers of EVERUN material in the midsole-where it cradles your foot as it sinks in and then bounces back as you push off. The new triangle-lugged outsole design improves the shoe’s flexibility, while firmer material under the inside of the heel and arch controls inward rolling. EverRun: Both shoes contain EverRun. EVERUN’s patent-pending Topsole construction process positions a 3mm layer of Saucony’s revolutionary EVERUN foam material closer to the foot, directly under the sockliner, instead of embedding it in the midsole below a layer of rigid cement. This construction process distributes propulsion force over more area, reducing local peak pressures while delivering a dramatically more lively and responsive ride.


ENTER for a CHANCE to WIN a FREE PAIR of TRIUMPH ISO2 or HURRICANE ISO2 RUNNING SHOES!!
(There are two separate entries below. The first entry is for the free pair of Triumphs. Scroll down to see the entry for the free Hurricanes. Drawing ends on Sunday, March 27th and the winners will be announced Monday, March 28 on the blog. Good Luck!)