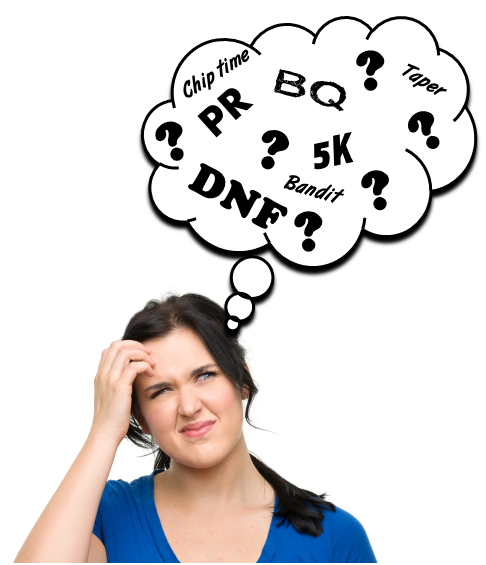 If you were like me when I first started running, you probably felt a little lost from all the running terms andwere hesitant to ask the more experienced runners you knew what the heck they all meant. Took me a while to get up to speed, but I finally became running-term literate. Hears a little cheat sheet to help you out if you need it.


• Easy Run—a slow run done at a conversational pace
• Fartlek—a Swedish word for speedplay; workout includes faster running mixed with slower running; can be done in any setting—track, trail, or road
• Repeats or Intervals—type of workout where a set distance is run repeatedly with a recovery jog between; for example 6 times 400 meters with 100 meters recovery jog; typically done on a track
• Cadence—the number of footstrikes made within a minute
• Foot strike—how your foot hits the ground (heelstrike, mid foot or flat foot, and fore foot)
• Speed Work—short, fast intervals with recovery jogs between; increases your leg turnover and maximizes your stamina and race confidence
• Tempo Runs—workouts where you run at a steady pace that is around 70% to 80% of your max aerobic capacity; near race pace, but not race pace
• Hills—workouts where a runner runs up a hill fast and jogs down then runs up again; helps develop leg power and aerobic capacity
• Long Runs—longest run of the week; usually on the weekend
• Recovery Runs—slow to moderate running to recover from hard workouts or races and/or maintain aerobic conditioning
• Cross-Training—low- or no-impact activities such as swimming, cycling, and using the elliptical at the gym that increase conditioning
• Pace—the measure of the speed of running; usually quantified as minutes taken to run a mile; for example a runner may run a 7:00 per mile pace for a marathon
• PR—Personal Record or Personal Best; fastest time a runner has run for a given distance
• Junk Miles—runs used to reach a weekly or monthly mileage total rather than for a specific benefit
• 5K—race with a distance of 5 kilometers (3.1 miles)
• 10K—race with a distance of 10 kilometers (6.2 miles)
• 15K—race with a distance of 15 kilometers (9.3 miles)
• 20K—race with a distance of 20 kilometers (12.4 miles)
• Marathon—race with a distance of 26.2 miles
• Half-Marathon—race with a distance of 13.1 miles
• Bandit—a person who runs a race without paying the registration fee
• BQ—a Boston qualifying time or a race that's a Boston qualifier
• Carb-loading—eating a high-carbohydrate diet (60%-70% of the total calories) at least three days prior to a race to fill the glycogen stores
• Chip time—finish time that's recorded by a computer chip typically worn on the shoe or around the ankle. Tracks each runner's time from when they cross the start line and finish line.
• Kicks—running shoes
• CR—course record
• DNF—did not finish
• DNS—did not start
• DOMS—delayed onset muscle soreness
• Elite runner—a person who has reached the highest level in his sport
• Gun time—finish time that begins when the start gun sounds until the runner crosses the finish line
• GU—a brand of sports gel that's a concentrated sources of carbohydrate (fuel) and electrolytes
• "Hitting the wall" or bonk—a time during a race when your glycogen stores become depleted and fatigue overwhelms you. Typically happens around mile 20 in a marathon.
• Master—a runner 40-years-old or older is classified as a Master in the US. In other countries the term used is Veteran
• Negative splits—running the second half of a race faster than the first
• NR—national record
• Pace—the measure of speed of running; usually thought of as the number of minutes it takes to run a mile during a race
• PB—personal best
• PR—personal record
• Road Race—running contest that takes place over streets
• Singlet—a tank top for running
• Snot Rocket—the act of closing off one nostril while blowing forcefully out the other nostril to clear it of...well...snot, while on the run
• Streaker—a person who runs at least one mile on consecutive days never having a day with no running
• Taper—reducing your mileage several days to a few weeks prior to a race
• Ultra—any race longer than a traditional marathon which is 26.2 miles
• USA Track & Field—the national governing body for running in the US
• WR—world record
Posted by RunnerDude at Friday, June 20, 2014