Hamstrings and Quads should be the "yin yang" of the body working together in harmony. The quads a little stronger than their posterior friend then hamstring. Hammies, however, give many a runner trouble, particularly on long runs.  Hamstrings aren't supposed to be as strong as quads, but many times runners, especially distance runners, have overy dominant quads. This is often the case in runners who heel strike. They're constantly loading the quad ready to pull their bodies forward due to the wider stride. This constant activation strengthens the quad but weakens the hamstrings. Sometimes the quad can get so out of balance that it can pull on the hamstrings causing them to become tight setting the runner up for injury. Or the hamstrings become weak, so when they are needed on a run, the may pull or cramp.

The best recommendation I have is to reign in the stride so the foot lands more under your center of mass. This decreases the quad activation, keeping everything in better alignment and letting the body work more like a shock absorber. You can also work to strengthen the hamstrings. The exercise below is a great one to do just that. This take on a simple hamstring leg lift uses a med ball as the base for the working leg. The med ball adds a balance element causing you to focus more on using the hamstring to lift the torso into a bridge. It's also a great core exercise.

To do the exercise, lie on a mat. Place your left foot on top of a medicine ball. Raise your right leg while keeping the left foot on the ball. Use the left leg to raise your body off the mat until your body is a straight line from your left knee to your shoulder, then lower your body until it almost touches the floor. That's one rep. Do 8-10 or 12-15 reps. Repeat the process with the right foot on the step and the left leg in the air. 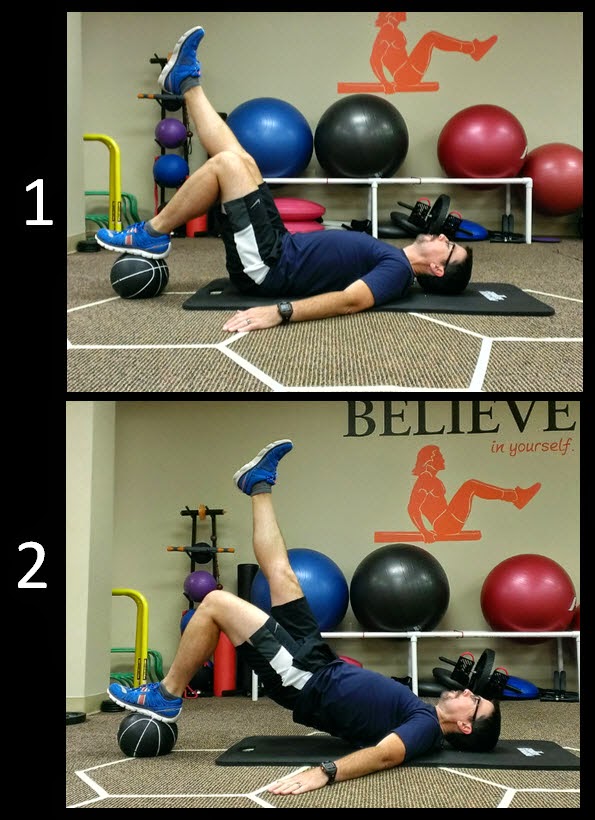 I do those! They hit that little area high on your hamstrings and low on your but! Also do a version digging my heel into the ground (hint from The Four Hour Body)