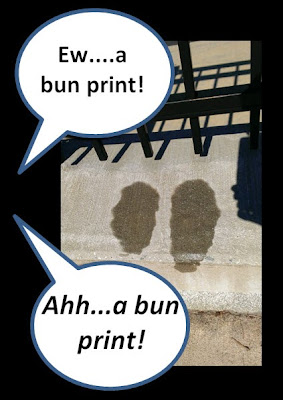 Sometimes you find evidence of your success in the most unlikely places. Sue who is in her fifties, joined one of my beginning running groups over a year ago. New to running, it was a challenge for Sue, at first. But man was she committed. She came to every group run ready to run. Sue lives near me and I'd see her out in the neighborhood getting in her solo homework runs too. She was bound and determined to get to the end of the program and be able to run 30-minutes straight with no walking. Boy did she accomplish that... and more. Not only did Sue finish that 30-minute run, she went on to do the group celebration 5K a few weeks after the group's last run. Sue was bitten. Bitten by the running bug. Sue is now a member of my RUNegades program which includes each week a group full-body circuit workout, one group easy run, and one group speed workout. She's running over 5-miles now.

But, I knew she was bound for success early on in the program. Each of our group runs finishes up a slight hill that leads out of an underpass tunnel near the RunnerDude's Fitness Studio. I have the group stop there to do stretches. The wall along the side of the the hill makes a perfect ledge for propping up feet for hamstring and hip flexor stretches. It's also a great place for the group members to sit after the run to chat about their run.

So, what is a "Bun Print to Success"?  Steve, another previous beginning running client sums it up best, "Learn to celebrate the small gains." During stretching after a beginning running group, Steve ran up to me all excited. He was amazed that he just balanced on one foot while doing a quad stretch. Steve had not been able to balance on that ankle for several years due to a previous injury. Running had helped strengthen his ankle and he didn't realize it until that one-legged stretch. That made his day. Celebrate the small gains.

Whether it's a bun print, balancing on one foot, or finishing that 5-miler 10 seconds faster than the last time, learn to celebrate the small gains.  Small steady gains lead to huge success in time.
Posted by RunnerDude at Thursday, September 05, 2013