As a coach and personal trainer, there's nothing more rewarding than to see someone progress and realize their potential and that the only boundaries there are, are the ones we set for ourselves. The RunnerDude's Fitness motto is Trust. Believe. Conquer.  TRUST is often the hardest part. Trusting yourself that you'll commit and stick with it. Trusting your trainer that he/she has your best interest at heart. BELIEVE is equally difficult. Believing that you can do things and achieve goals that before seemed so unattainable and out of reach is hard. CONQUER sometimes seems the most unattainable. How can you conquer a goal when just getting to a workout is overwhelming?

The good news is that it can be done. You can Trust in your training. You can Believe in yourself. You can Conquer that goal, no matter how unrealistic it may seem now.

The biggest key to success is having realistic goals. Frequently I have people come to me who want to run a marathon. My first question is, "When is the marathon?" My next question is, "Are you currently running and if so how far?" Often the response is "The race is in 3-4 months." and  "I'm not running now." or "I'm running about 10 miles a week." While I don't want to burst the individual's bubble, I also, know this is an unrealistic goal. Yes, there probably is someone in the world who has gone from the couch to a marathon in 3 months, but my goal isn't to just get you across the finish line barely alive. My goal is to get you across that finish line healthy, alive, and motivated to continue for more. So, my response to these individuals is, "It's too soon for a marathon, but how about we work on a base-building plan for a few months. Once you're able to maintain a total weekly mileage of about 20-25 miles per week for at least a month, then we can look at marathon training."

Sometimes we're our own worst enemy. Running a marathon is not an unrealistic goal. Even if you're extremely obese and have never run in your life. Often the culprit is the time frame. We are a society of "now!" We want everything right now. So, often we'll pick a challenging goal and then put an unrealistic time frame in which to complete it. This is a recipe for failure. I see if over and over. However, if you take that same challenging goal and break it down into a realistic time frame with multiple short-term goals or bench marks along the way, then all the sudden your realize, "hey maybe I can do this."

My son, Duncan, is the perfect example. Overweight, on his own, he decided 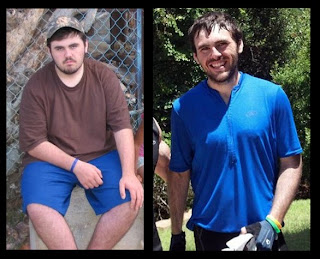 to focus on a healthier lifestyle. He decided to stop eating fried foods. Pretty quickly he noticed some weight loss. So, then he started making more diet modifications. More weight came off. At the same time, he started working out at home. He noticed how working out increased his weight loss. So, he joined my beginning running group. He lost more weight. He started adding more workouts to the week. Before long, working out, eating right, and living healthy was a lifestyle not a burden. He's lost about 110lbs in a little over a year. His mind set has changed from, "I can't do that." to "What can't I do?" He's run 5Ks and a half-marathon and is in training for his second half-marathon with his eye on training for a spring full marathon. Incremental goals. Achievable goals. Goals he has and will continue to obtain. 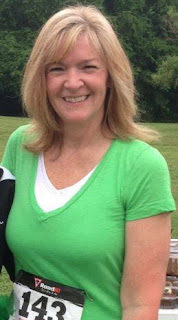 Another client, Kim, has been such a joy to watch blossom as a budding athlete. Kim was in one of my beginning running groups a year or so ago. She did well, but then I didn't see much of her afterward. Then when I started my RUNegades running group (a year-round group the meets weekly for a full-body workout, a group run, and a group speed workout), Kim and some fellow runners from her previous running group joined. I think she was running about 3 miles at the time. Within the first six months, Kim extended that run distance to 5+ miles. She became fitter with the weekly workouts, not only physically, but also mentally. The Trust and Believe were taking root. Earlier this summer, my full and half marathon training groups kicked in. Hesitantly, Kim approached me about whether or not she was ready to do a half. That was a huge self-confidence step. Making that goal and acting on it. Kim signed up and just this past Saturday, she did her first 9-mile long run and did an awesome job.

Last night after the RUNegades group workout, she told me that when she signed up for the race she was literally sick on her stomach from fear over what she had done. But, then she thought about how far she's come and all that she's accomplished. Yesterday it hit her that she now thinks of herself as being able to do anything. She sees herself as a runner not just someone who runs. It's like all the sudden Trust. Believe. Conquer has become a reality. Kim gets the Gibson Daily Running Quote and the one she received yesterday so eloquently said what she was feeling.

"It takes guts just to step out the door for a run. Let alone take on a half-marathon. This is what makes the running community so remarkable. For in that shared belief in pushing limits and venturing into murky waters of a previously undoable race distance, there comes to exist a community of people buoyed constantly by hope and a sort of learned fearlessness. The weak grow strong. The strong carry on.

I don't know if there's a proper way to define toughness in a runner, but I do know that there comes a sudden moment when the mindset shifts. The impossible become doable, or at least attemptable. The long run goes from two miles to four to ten to fifteen, until it becomes routine at some point deep in an intense training cycle to knock off a couple hours without giving it a thought."

Kim has had that moment. Her mindset has shifted. The impossible is now the doable. She's now looking past her approaching half-marathon to a full marathon. Can she do it? Hell yeah!

Sometimes it is so hard to beat the now attitude that society has! Keeping that attitude stops you from experiencing so much though.