My first marathon experience started just shortly before 4:00 a.m. on a  Saturday morning in June 2006 after a restless night of sleep. I'd been awake since 3:00-- tossing and turning-- and when I finally couldn't stand it any longer, I got up and got going. The weather report during the week left me a little concerned: scattered thunderstorms with winds 20-30 mph. But considering the bulk of my training had been done in less-than-ideal weather, I didn't let myself fret too much. As it turned out, the weather could not have been better as the entire race was under cloudy skies with temperatures never above 80 degrees. And though the wind picked up a couple of hours into the race, itwasn't nearly the problem I'd feared it would be.

Another nice surprise was my lack of nervousness on race morning. I'd expected my stomach to be churning, preventing me from eating and drinking what I needed, but I was all business from the very start and only felt the excitement of just getting started. I caught a bus to the starting line at 5:30 and enjoyed the atmosphere of the other runners as we talked amongst ourselves. I overheard one runner who'd done a trail marathon only seven days before! This was a very small hometown event with about 85 full marathon runners and 24 relay teams (I noticed immediately that the women were far outnumbered by the men). After exiting the bus, I made two trips to the port-a-potty and spent awhile warming up and stretching. Before too long, it was showtime!

The first eight miles were as easy and enjoyable a run as I can remember in a long time. I was riding the adrenaline high and just coasting along (though still being very aware of my pace and starting off slowly). I ran the first mile and a half without taking a walking break-- mostly in an effort to let the crowd thin out a bit. Once I started the breaks, however, I took them regularly every five minutes or so, timing them well enough to walk through the water stations. The few trouble spots I'd been having with my legs weren't making any noise and I was gaining confidence with every mile that passed.

The course was absolutely beautiful, but it was definitely open and very rural. The sun was at my back almost the entire way, but it poked through the clouds just often enough to cast a shining glow across the farms and canals I ran alongside. The spectators were few, but those that came out made all the difference. There was even a para-glider floating across the sky! My parents and sisters traveled several hours to join my family and friends here in supporting me along the course. I outfitted them with things I'd need along the way and they followed through wonderfully. Except for the gal I rode next to on the bus, I was never struck up in conversation with another runner along the course, but I did make an effort to acknowledge those I passed with a "how're you doing?" or some other greeting. It took about 13 miles before the ranks really thinned out, but for the first half of the run I yo-yo'ed quite a bit with the same people, one fellow in particular who caught me at the end to congratulate me and thank me for helping him keep his pace.

I was particularly diligent in drinking and snacking often and along with the walking breaks, I know it helped my performance enormously. I carried my own Gatorade, but also drank cups of water that were offered at the aid stations. Bits of bagel, gummy bears, a whole banana, orange wedges and three energy gels sustained me through the entire 26 miles. I was a little concerned upon learning the port-a-potties were eight miles apart along the course, but fortunately didn't need to take advantage of them anyway. 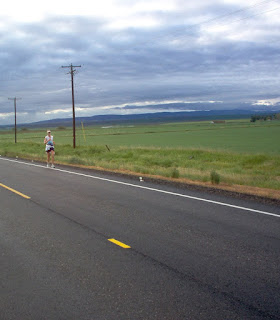 I kept an eye on my watch at certain mile-markers and realized I'd set a PB time for the half distance when I crossed it. Part of me was proud of that fact, but another part worried a bit that I hadn't paced myself slowly enough during the first half. But what was done was done and I kept on trucking. At mile 15, the course passed by a small cemetary. I laughed to myself at the irony of it... which apparently was recognized by others as well with a sign on a post that read, "NO, you can't stop here!!" It was shortly after this that I passed a barefoot runner. I'd noticed him very early on and just shook my head in amazement. He passed me five miles or so into the race, but when I overtook him many miles later, he was still moving but looked to be in some pain. I asked how the feet were and when he replied positively, I told him he was amazing and wished him luck. Didn't ever see him again.

The real first hint of fatigue set in around mile 18. By this point, I was two miles into a stretch of the course that consisted of rolling farm hills. I'd trained very well for hills and felt strong doing them, but they were definitely a challenge so many miles into the run. My calves started burning a little during the hills, but only enough to gently remind me I was running a marathon. I forged ahead and was distracted nicely by more signs along the road ("This is fun... right?!" and "Just keep on breathing") and a small, bright red single-engine plane that passed overhead several times.

Before I knew it, I was at mile 20. A glance at my watch told me I was 12 minutes ahead of pace from my 20 mile training run and I made a quick mental calcuation of what my potential finishing time could be if I could keep up that pace. Though my ultimate goal all along was just to finish, I knew what I was capable of doing and the thought of beating that time was all the motivation I needed. I saved my last energy gel specifically for mile 20 and when I finished it and felt the subsequent "kick", it was time to kick my heart into gear and finish this thing off. I'd wanted to run the last 10K without walking and I did for the most part. Except for the last few aid stations through which I walked shortly, I kept running. As it reached miles 22, then 23 and 24 my pace slowed more and more. My body ached top to bottom, but I was still running. And amazingly, I still felt really good doing it. Finally, the last mile point two-- the homestretch!-- and I think I was just a tiny bit delirious. This stretch was on mainstreet in downtown with traffic on both sides, and even with people honking and cheering from their cars, all I could concentrate on was taking the small, slow steps needed toward the finish line. The last 300 yards were a blur, but when I heard the crowd start to cheer and I saw the finish line, I snapped to attention and picked up my pace. I heard my name called and held up my arms to cheer for myself when I crossed the gate. I did it!! My final time was 4:26:54... a time I didn't think I would even come near to achieving (and which was good enough to place me in the top half of the overall runners and 7th place out of 23 women). I felt utterly exhausted but absolutely triumphant. Once out of the way of the crowd, I fell to my knees, held my head in my hands and sobbed, knowing I had just accomplished something extraordinary by all standards.

I'll never be a speedster and will probably always place somewhere in the middle of the pack, but whether it's a local 5K or another marathon, I'm always planning my next race. To date, I've finished 13 half-marathons and 4 full marathons... with many more to come!

My family and friends are a huge support, of which I couldn't do without. But truth be known, I don't run for anyone but myself. I run to test my body. I run to clear my mind. I run to embrace my emotions. I run to celebrate my life. It's what I do. It's what I am. I am a runner!

Be Sure to check out Angie's blog, Tall Girl Running.

Posted by RunnerDude at Monday, September 03, 2012

An inspiring story, and I really enjoyed the final sentence: "I am a runner." It's wonderful to make that personal transition into how you see yourself. A week ago my granddaughter saw me change into some shorts. She asked, "Are you going for a run?" The answer was "No. Just getting comfortable." But the validation wast there... even my granddaughter sees her grandpa as... a runner. Thanks for posting the story.