The RunnerDudes Do Battle at Battle! 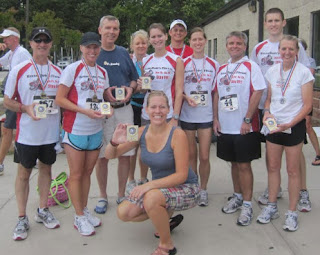 I try really hard to keep RunnerDude's Blog and RunnerDude's Fitness separate. From time to time, I'll mention my running and coaching business and today is one of those times that I'm beaming with so much pride that I just have to share.

Saturday, 20 of my runners participated in the Battle of the Triad Half Marathon and 5K in Kernersville, NC. This is a great race put on by our awesome local running store Off'n Running Sports. Eleven of the runners are from my current half and full marathon training program at RunnerDude's Fitness and the other nine runners are from my fitness walking and beginning running corporate programs over at Volvo Financial and Volvo Trucks. Nine of my half and full marathon trainees won or placed in their age group and six of the Volvo runners won or placed in their age group in the 5K. For most of the Volvo runners it was their very first 5K!

Pictured above are my half and full marathon trainees who participated in Battle, many of them holding their hard-earned age division awards. So, proud of you guys!!!

If you're in the Greensboro area, I'd love to have you join us in some race training! Also, if you work at Volvo Financial or Volvo Trucks in Greensboro, our next Fitness Walking, Beginning Running, and Intermediate Running groups begin on September 12th! Email me at runnerdudeblog@yahoo.com if you're interested in joining one of the groups.
Posted by RunnerDude at Sunday, August 28, 2011

really very good and informative.
The guys dug deep though and Day Four turned out to be the best day for distance, with most of them achieving their best or second best distance of the whole trip. Obviously crossing the halfway mark had them feeling strong and motivated to push harder!
distance calcualtor