Running and Breathing: A Lesson in Oxygen Intake and VO2 Max 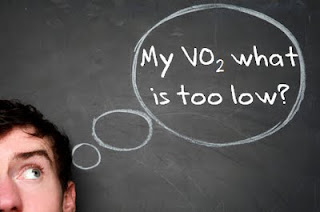 When first starting out, many runners struggle with running and breathing. Many have probably heard the term VO2Max. And many know that having a high one is good, but most aren't quite sure what it really represents. The term broken down actually stands for V (volume per time), O2 (oxygen), Max (maximum).

Sometimes VO2 max is referred to as maximal oxygen consumption, maximal oxygen uptake, peak oxygen uptake or aerobic capacity. Never mind all that fancy and technical lingo. It basically stands for the maximum amount of oxygen your body can take in and actually utilize at max exertion.

Made even simpler, if you increase your O2 uptake, you'll run faster, bike faster, and/or swim faster. Your performance in any aerobic endurance activity would improve with an increased or high VO2Max.

Simply breathing faster or heavier won't increase your VO2Max. We've all seen runners huffing and puffing who look like they're about to hyperventilate (and if we're being honest, we can all probably include ourselves in that group at one point or another).

Breathing for New Runners
New runners often experience rapid heavy breathing. As a new runner's heart rate increases, his/her body automatically knows it needs more oxygen, so the most natural thing to do is to breathe faster. The reason this isn't helpful is because the breaths are usually shallow and even though the runner is breathing rapidly, he's not getting the oxygen deep into the lungs where it's taken by the blood stream to the muscle to make energy. A new runner needs to concentrate on a deep inhale and a big exhale to clear the lungs of CO2. Focusing on belly breathing (seeing the abdomen expand with each inhale rather than the chest) will help new runners get more oxygen deep into the lungs.

Tidal Volume
The amount of air inhaled and exhaled with each breath is your tidal volume. It increases from .4 to 1L at rest to as much as 3L during aerobic exercise. An aerobically unfit person's tidal volume is going to be less than that of an aerobically fit person. Also, a person who's aerobically unfit isn't going to have a very complex network of capillaries (the smallest blood vessels woven throughout the muscle fibers) at the muscle level. A person who has a higher tidal volume and a more complex system of capillaries at the muscle level is going to be able to get more oxygen into the lungs which will diffuse into the pulmonary blood and make its way down to the capillary level to the many mitochondria in the muscle. Mitochondria are found inside the cells, and they're the power producers. The mitochondria is where cellular respiration occurs, which produces fuel for the cell's activities.

The good news is that you can increase your tidal volume, expand your capillary network, and increase the number of mitochondria you have. By doing consistent aerobic exercise (running, cycling, swimming, etc.), you'll increase all of the above. The more you run, your body will actually increase and build that important network of capillaries in the muscles and when that happens, you'll actually increase the number and size of the mitochondria in the tissue. When that happens your body will be more efficient at extracting oxygen from the blood and getting it to the muscle where it's needed for energy production. For experienced runners, more intense workouts such as intervals, hill repeats, fartleks, and/or tempo runs will help up their VO2Max.

New runners will see the dramatic increases as they work to improve their VO2Max. Once you reach a certain level, the athlete will plateau and it will be harder to make increases, but continued VO2Max training will help more experienced runners maintain their VO2Max level for longer periods of time. This will help them become even more efficient runners and help keep fatigue at bay for longer. Genetics does play a role with VO2Max. So, if you can't seem to get past a certain level no matter what you try, you can blame mom and dad. Also, as you age, your VO2max will naturally begin to decrease a little each year.

To read the rest of my article and find out how to calculate your VO2max [click here].
Posted by RunnerDude at Friday, June 10, 2011

This is so helpful. I am a very new runner (more of a fast walker, then run a little, etc.) and I haven't been able to figure out the breathing thing. It feels like I'm literally dying.