Live Fit, Be Fit, and Stay Fit at Any Age! 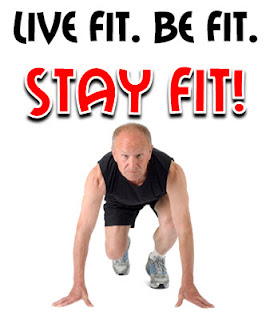 The other day, Charles walked into my studio and wanted to know if it was possible for him to run a sub 4-hr marathon. Well having just met Charles, before answering, I had him tell me a little about himself and his fitness history and running. He shared that he’s been a runner for many years. He does a little weight lifting with some dumbbells and some other equipment he has at home, but nothing major. He shared how he’s run several marathons over the years even Boston, but he hasn’t run one in about 12 years. I asked if he had a recent race time that I could use to project out a ballpark marathon time. “Hmmm, let me see. I ran a 5K back in January. I really didn’t train for it or anything. Just ran it. My time was around 25:20,” was Charles’ response. That calculated out to about a 4:06 to 4:07 marathon, so I figured with some actual training, he probably would come in at or just under 4 hours.

I asked Charles, if he had ever worked with a running coach before. He said no and that actually he’d really never used a marathon plan before. He’d just run, run, and run lots more before the race. So, I asked him why he felt he needed a coach and a plan now. Charles responded, “Well, I’m 72 and it’s been a while since I’ve run that far, so I figured, I’d better get some coaching.”

Yep, Charles is 72. He is a true inspiration. “Use it or lose it.” It’s a bit cliché but definitely true and Charles really personifies that old saying better than anyone. Charles came in for his fitness assessment a few days after our initial talk. The assessment takes about 1.5 hours and includes taking vitals, body composition measures, balance and flexibility testing, muscular strength testing, muscular endurance testing, and a VO2Max test (1.5-mile run test). Charles’ results were amazing. His resting heart rate was 55 and he scored above the 90th percentile in his age group for his VO2Max. His score is actually the “Excellent” benchmark for male runners ages 46-55. The next week, Charles began his resistance training with me in the studio. I use the stability ball and the Bosu in a lot of my exercises to help increase a client’s stability and balance. I was ready for Charles to be very wobbly, not because of his age, but more because most people don’t add a balance element to their training and as a result don’t have very good balance. Charles had no trouble. He stayed in control and never wobbled once. I was truly impressed. Now Charles may have inherited some great genes from Mom and Dad, but I think it has more to do with the fact that he’s continued to be active his entire life.

Not only does exercise help improve and maintain all the aforementioned, it also helps keep your immune systems strong which enables you to fight off infections more quickly. A Duke University Medical Center research study showed that aerobic exercise is just as effective as medication in treating major depression in the middle-aged and elderly. Other studies have also shown that aerobic exercise improves cognitive abilities. The Mayo Clinic’s Alzheimer’s Blog shared in a 2008 post that the Alzheimer's Association predicts that 10 million baby boomers will develop Alzheimer's disease in the United States — that’s about one out of eight. But, that same article goes on to say that “Physical activity appears to inhibit Alzheimer's-like brain changes in mice, slowing the development of a key feature of the disease.” Other positive information included a study that observed 6,000 women age 65 and older, over an 8-year period. The study reported that the more physically active women in the group were less likely to experience decline in mental function than the sedentary women.

There’s a lot more research to be done for sure, but bottom line, exercise is critical to healthy living later in life. According to IHRSA (International Health, Racquet and Sportsclub Association), adults over 55 are the fastest growing segment of health club members. Even if it’s not on a long-term basis, it’s a good idea to have a personal trainer show you how to use the various machines and free weights to ensure you’re using proper technique. This will go a long way in helping to prevent injury.

Not sure where to start? Intimidated by a big gym? It can be overwhelming. ICCA (International Council on Active Aging) has developed a great checklist to help seniors find an “Age-Friendly Trainer” as well as an “Age-Friendly Fitness Facility.” Remember, you want to find a trainer that will go beyond just taking you through some exercises. You want to find someone who will design a program of exercises specific to your needs and fitness goals.

So, do like me and make Charles your idol. Live fit. Be Fit. Stay fit!
Posted by RunnerDude at Tuesday, April 26, 2011

Wow very inspiring. Thanks for sharing that!

Excellent article. Informative and well written as always. Thank you for the checklists. I plan to pass both the article and the checklists on to others.

Thanks, Zaneta!Hope you're doing well!

Great checklists. Thanks for all the info and the inspiration. Sometimes it's hard to get out there, I'm 58 and still plugging away as best I can.