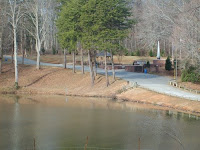 After moving to Greensboro, I quickly laid out several running routes in my neighborhood and at the local parks, but was ignorant to the miles of scenic greenways and trails all around me. I lived in Greensboro, NC four years before discovering the huge network of trails and greenways maintained by the city. The city I moved from had no such network, so I really didn't even know such things existed. It wasn't until I joined my running group, the BlueLiners, that I was exposed to greenway running. 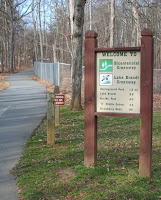 In fact, there are over 80 miles of trails and greenways available in Greensboro. They're categorized into four categories—botanical gardens trails, greenways, park trails, and watershed trails. These hiking, biking, and multiple-use trails incorporate some sidewalk connectors and include paved and natural surfaces. The trails are located in urban and natural settings, and can be found in neighborhood and regional parks, open spaces, and around the city's lakes.

The greenways take you away from the city and let you enjoy a little nature on your run. Year-round beauty abounds making for extremely peaceful and serene runs. I often see deer on my Saturday morning long run and today the most beautiful blue heron took flight right in front of me before flying over the lake. I de

finitely never enjoyed this kind of beauty on my neighborhood runs. In addition to the natural fauna, I've had a few "Charlie" sightings. I've discovered that world-famous endurance runner Charlie Engle, lives just down the road and we frequently cross paths on the greenway.
One greenway runs by two parks, a national park—(National Military Park at Guilford Courthouse) as well as a city park (Country Park). Kind of humbling to know you're running by the site of the largest, most hotly-contested battle of the Revolutionary War's Southern Campaign.
If you're running the same old neighborhood routes 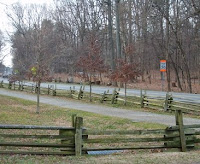 over and over, check out your city's government Website and see if your town has greenways and trails for you to run. They're often close by but because you're not looking for them, they go unseen. One greenway in Greensboro runs right behind my church and alongside a main road I travel every day and I still didn't know of its existence. So, do some exploring and hit the trails! You'll be surprised how invigorating a change of pace can be.
Posted by RunnerDude at Wednesday, February 25, 2009

Your blog is a gem! Thank you for having it and posting some great info!

Thanks Marisa! Appreciate the feedback. Just checked out your Evolve Multisport site. Awesome! What a great service and right here in Greensboro too!

Great photos. We have such pretty trails around there that I've often thought "someone" should submit one of those "rave run" photos to Runner's World on one of our trails.

Thanks Dena! Was fun taking those pictures, especially climbing up on that statue. LOL! Had quite a few more pictures from the Strawberry Rd. end of the Greenway, but didn't have room to include them on the blog. I think you're right about submitting a picture to RW's rave run. Maybe in the spring when everything's in bloom would be good.