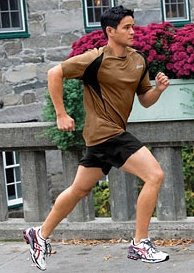 One of my running buddies, Les, kids that his longest run of the week often ends up being his fastest. I think that probably happens any time you get a group of runners together. You're bound to have a little healthy competition take place. Or, is it just a natural thing to get warmed up and then speed up on a long run?

Historically, the rule of thumb has been that your long run should be run at a slow steady pace with the main goal of building endurance. That all makes sense, but I've often wondered, however, that if you never speed it up on some of those long runs, how are you going to maintain your desired race pace for 26.2 miles? I'm not advocating running your long runs at break-neck speed, but should the entire run but at such a slow pace?
Well, as usual, when I get curious about something I start doing a little digging. What I found was that some of the newer marathon training programs have actually begun to incorporate two types of long runs.
Long Run #1: a long, steady, easy run at a conversational pace. The goal of this run isn't pace but getting the body used to being on its feet and running for the 26.2 miles.
Long Run #2: a long run that breaks the run into three parts.
Part 1: Running the first 2/3 of the run at a conversational pace.
Part 2: Averaging race pace along the last 1/3 of the run.
Part 3: Sprinting to the finish at below race pace.
Both types of runs have equal importance and should be alternated in a training plan. Long Run #1 helps teach your body to burn fat and store glycogen while also preparing your body to run even when it gets fatigued. In essence, building your endurance both mentally and physically. Long Run #2 begins at a conversational pace like Long Run #1 and continues for about 2/3 of the run. Then the pace increases to marathon race pace for the last third of the run. The very end of the run is a sprint to the finish. So, on an 18-mile long run, a runner wanting to average an 8:00 marathon pace would start Long Run #2 at an 8:30-9:00 pace and continue this for about 12 miles. The last six miles would have an average pace of 8:00 with the last stretch speeding up to a sprint of a 7:15 to 7:30 pace.
Greg McMillan of McMillan Running recommends that Long Run #1 should be done year round, but that runners should only incorporate Long Run #2 in the last 8-10 weeks of a marathon training plan to avoid peaking too soon. McMillan also advocates weaning yourself off carbohydrates in order to teach your body to burn its internal stores of energy and not rely on external sources like sports gels. Click here to read more about McMillan's view.
So, get out there and run and speed up those long runs from time to time!
Posted by RunnerDude at Monday, April 06, 2009

I've always wondered about that... how am I supposed to just "go faster" than I've been training at with long, slow runs. Very helpful post.

Hi Dena! I agree. I did start to increase the speed of my long runs "unofficially" when I trained for Chicago and I think it really helped. Looking forward to adding it more officially to my training for Marine Corps. You should think about running that one in the fall.