In the recent posting "Fuel on the Run," I mentioned a food called Uncrustables® as a pre-run and post-run food option. If you didn't click on the link to find out more about what this unusual suggestion was all about, you might be surprised to know that it's simply a PB&J (peanut butter and jelly sandwich). 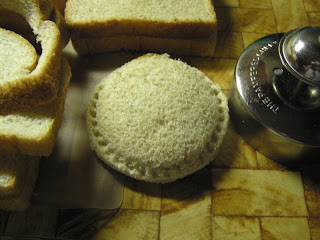 My wife used to attend Pampered Chef® parties when they were all the rage in my town about 10 years ago. At one of the parties she bought this funny contraption that looked like some type of flower-shaped press. I asked her what it was and she said it was a fancy finger-sandwich press. Just what we needed. Something that made fancy sandwiches and wasted half the bread and taught our kids that the crust wasn't something we were supposed to eat. I think we used the press once for a birthday tea party for my daughter.
Over the next few years, I'd come across that press in the "junk" drawer and chuckle. Then one day while I was in the frozen food section of the grocery store, something caught my eye that looked a lot like those dainty little finger-sandwiches my wife made for that birthday tea party several years back. Smucker's® (the jelly and jam company) had packaged a frozen version of the same exact pressed sandwich, filled them with peanut butter and jelly, and called them Uncrustables®. I stood there dumbfounded and thought, "Dang, what a great idea." Of course I didn't tell my wife that. I bought a pack to show my wife and kids and every now and then we'd buy them for a novelty to put in the kids lunches.
It wasn't until last year that I discovered another purpose for the 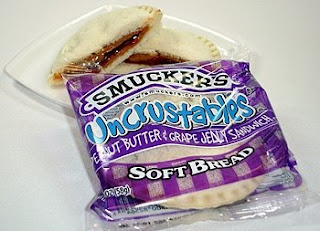 se pressed little sandwiches: pre-, during-, and post-run fuel! Neal Leeper, a running buddy of mine, is an avid marathoner who doesn't care too much for the sports gels. He discovered from a triathlon friend of his that Uncrustables® make a great food to eat during a long run. Because the sandwiches are individually packaged and because the sandwich itself is pressed around the edges, they transport and keep surprisingly well on the run. Just pop one in a small fanny pack on your hydration belt and you're good to go. The carbs from the bread and the jam and the protein from the peanut butter make perfect fuel for a long run. They also make a great pre-run mean as well as a post-run snack.
Now I place that dainty pressed little finger-sandwich in the same category as Wite-Out®, Post-it® Notes, and the Pet Rock....Why didn't I think of that!
Posted by RunnerDude at Saturday, April 11, 2009

Email ThisBlogThis!Share to TwitterShare to FacebookShare to Pinterest
Labels: eating during a long run, fuel, Uncrustables

I think your blog is gonna get me in trouble.
That is so cool. I do eat those, but would rather make my own.

I've got to have one.

Hey Nick! Just eat them with your running and you'll be just fine. LOL! Hey just found out that they make a peanut butter and honey on wheat bread version too.

I thought you would have been more angry that you didn't claim that invention first. I've always wanted to try those, but technically, I could make my own (just eat the crust first..)