Run a Half and Help a Great Cause!

Are you a runner and want to contribute to the Crohn’s & Colitis Foundation? Then participate in Team Challenge. Team Challenge is the Crohn’s & Colitis Foundation’s new endurance training program. This exciting new fundraising program trains you to run or walk a half marathon while helping the Foundation raise funds to find a cure for ulcerative colitis and Crohn’s disease. It may be too late to get in the needed training for two of this year's races (Kona Half Marathon-June 28, 2009 and Napa to Sonoma Wine Country Half Marathon-July 19, 2009), but there's still plenty of time to train for the Rock-n-Roll Las Vegas Half Marathon-December 6, 2009. If you're an experienced runner and want to try for this year's race, the official Race registration has SOLD OUT on the event sites, but you can still get your registration by joining Team Challenge!

Check out the awesome video clip below that has runners in the program describe their experiences with Team Challenge. 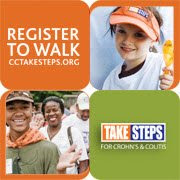 hree mile stroll and community celebration while we raise money for crucial research, bringing us closer to a future free from Crohn's disease and ulcerative colitis. More than 1.4 million American adults and children are affected by these digestive diseases. While many suffer in silence, Take Steps brings us together in a fun and energetic atmosphere, so we can make noise and be heard.

Click here to register today. Walk as an individual or as a team! With no registration fee, we ask walkers to raise our national average of $125 and qualify for our Take Steps t-shirt. The more money you raise, the bigger the incentive prize! Sign up today and become a leader in CCFA's mission to cure Crohn's disease and ulcerative colitis, and to improve the quality of life of children and adults affected by these diseases.

Are you into cycling? Join Get Your Guts in Gear for their 2009 Rides for Crohn's and Colitis! You can ride or join the support crew during these 210-mile, three-day cycling adventures.
I was diagnosed with Ulcerative Colitis eight years ago. Luckily medication and a healthy lifestyle have helped keep my UC in remission for about five years. There is a heredity element to Crohn's and UC and I have three children. None have shown signs, but I didn't have symptoms until I was 36. IBD (Inflammatory Bowel Disease) tends to run in families. Studies have shown that about 20 to 25 percent of patients may have a close relative with either Crohn's or ulcerative colitis. If a person has a relative with the disease, his or her risk is about 10 times greater than that of the general population. If that relative happens to be a brother or sister, the risk is 30 times greater.
It is estimated that as many as one million Americans have IBD -- with that number evenly split between Crohn's disease and ulcerative colitis. Males and females appear to be affected equally. Crohn's disease may occur in people of all ages, but it is primarily a disease of adolescents and young adults, affecting mainly those between 15 and 35. However, Crohn's disease can also occur in people who are 70 or older and in young children as well. In fact, 10 percent of those affected -- or an estimated 100,000 -- are youngsters under the age of 18.

Because of its nature, IBD doesn't get talked about a lot. You probably know someone suffering from IBD and don't even know it. Walking in a Take Steps event, running a half marathon with Team Challenge, or riding 210 miles with Get Your Guts In Gear are great ways you can help support this awesome organization. Thanks! -RunnerDude
Posted by RunnerDude at Wednesday, April 22, 2009

CCFA is an excellent organization. I did the one a couple years ago in Atlanta, GA.

Both I and my brother's brother-in-law suffer from Crohn's Disease.

I won't be running or walking for them this year, but will provide a donation.

Hey Amy! Thanks for sharing that you have Crohn's. That's so cool you've already participated in a run. I do the local 5K each year and I'm hoping the Team Challange program will eventually add a full marathon program. I've love to be a training coach for one.