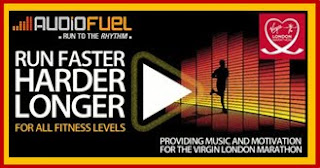 RunnerDude was recently contacted by the Virgin London Marathon and a running music company called AudioFuel to see if the readers of RunnerDude's Blog would like to help them out with a little project. My response? "You Bet!"

In the lead up to this year’s marathon, they’re asking runners to nominate their favorite running tracks of which the most popular will end up being the “soundtrack” of the London Marathon!

Organizers know that filling your iPod with good running music is what a lot of runners like to do and they’d love if you could nominate your favourites, too. Ideally they'd like to generate some debate and get nominations from a wide cross section of the running community as possible.

Audiofuel has also included a free fuel sampler - http://www.sendspace.com/file/ezy5qh that you can check out!
AudioFuel has provided a great incentive to the readers of RunnerDude's Blog—£20 worth of AudioFuel products! Here's how it works. Nominate your favorite running song(s) by emailing the name of the song(s) to RunnerDude at runnerdudeblog@yahoo.com by Monday, January 25th. Be sure to put "Song Nomination" in the subject line and the song name and your name in the body of the email.
-
RunnerDude will forward your nomination(s) on to AudioFuel and your email will be entered in a RunnerDude Drawing. The lucky winner of the drawing (announced on Tuesday, February 26th) will be able to select £20 worth of AudioFuel products! Yep, remember this is the London Marathon, so were talking pounds not dollars. How cool is that! (There are lots of compilations and playlists to choose from ranging between £5 and £12.) A special thanks to AudioFuel for providing such an awesome prize!
-
AudioFuel will publish the top ten nominations they receive from around the world as an iMix on February 1st.
-
Some of the nominated songs so far include...Don't Stop me Now: Queen, Sweet Disposition: The Temper Trap, Granite: Pendulum, Sugar Low: Aynsley Lister, Born to Run: Springsteen, Turn the Beat around: Gloria Estefan, Pump It: Black-eyed Peas, Insomnia: Faithless, Jessica: Allman Brothers Band, Run To The Hills: Iron Maiden, Heroes: David Bowie, Girl: BeckOn Time: The Disco Biscuits, Engineering Masterpiece: Lady Southpaw, Emily Kane: Art Brut, Call on Me: Eric Pridz, and No Easy Way Out: Survivor.
-
Don't wait! Send your favorite song to RunnerDude today! Good Luck in the Drawing!
Posted by RunnerDude at Thursday, January 21, 2010

Halo/Walking on Sunshine Mash-Up by the cast of Glee. Makes me run faster

Hi Christi! Awesome! If you haven't already, be sure to email that info to runnerdudeblog@yahoo.com to ensure your entry into the prize drawing! Good Luck!

Thanks Zoë!I got your entry email! Good luck!

Thanks, RunnerDude! email on the way!

Wow, you're international! That is awesome - and a unique idea for a contest. Honestly, I don't listen to a TON of music on the run, so I'll leave this one to the more deserving.

But, I wonder if they take podcasts as entries? :)

cool. I'm always looking for new tunes to add to my ipod.

Hey Taylor! Weclome to the blog! Good luck on the drawing!

Nice idea, Runner Dude. I'm not really a music listener on the run (strange, perhaps for a music teacher), but I do enjoy a running podcast. Mostly I like to run with my own thoughts!

I've never run with an MP3 player before, but I'm starting to put a list together. Since I'm so old, my stuff is from teh dinosaur age, but I couldn't help but think this would make an excellent tempo run tune.