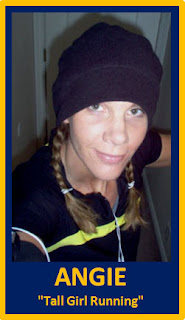 In a quest to get back in shape after the birth of her second child, Angie discovered a lot more about herself than just the need for fitness. Here's Angie's story in her own words:


I haven't always been a runner. In fact, although I certainly had the height and natural ability, I never played school basketball either because of one simple reason—there was too much running! Up until seven years ago, I was the quintessential non-runner. A slow jaunt to the mailbox and back was the extent of my running abilities and even that was overdoing it.


Two years after having my second child, I found myself motivated to get back into shape and lose the extra baby weight that was still (literally) hanging around. I started walking in earnest every day and lost about ten pounds. It was a good start, but I was eager and impatient. One day, while out for my walk, I did the craziest thing—I started running! Granted, it only lasted 30 steps before I had to stop, wheezing and gasping for breath. But those 30 steps were the start of something even I could never have foreseen.


What began as running simply for weight loss and recreation has turned into a bona-fide obsession. At the encouragement of a good friend, I ran my first 5K in June of 2005 and have been hooked ever since.


I was bitten by the marathon bug in June of 2006. I trained for five months, pounding the pavement every week for hours on end through the worst of winter conditions and constant nagging aches and pains. When I crossed the finish line four hours, twenty-six minutes and fifty-four seconds after the starting gun went off, I was utterly exhausted but absolutely triumphant. Once out of the way of the crowd, I fell to my knees, held my head in my hands and sobbed, knowing I had just accomplished something extraordinary by all standards. 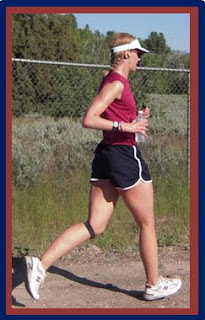 After enduring a spate of minor injuries and staging a comeback, I ran my second marathon a year later. As I crossed the finish line, once again overcome with exhausted elation, I realized how much I love running long-distance. I'll never be a speedster and will probably always place somewhere in the middle of the pack, but whether it's a local 5K or another marathon, I'm always planning my next race. To date, I've finished seven half-marathons and four full marathons... with many more to come in the future!


My family and friends are a huge support, of which I couldn't do without. But truth be known, I don't run for anyone but myself. I run to test my body. I run to clear my mind. I run to embrace my emotions. I run to celebrate my life. 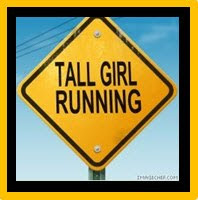 Angie, I too run for myself, to test my body, to clear my mind and to celebrate life. Running keeps me fit and more importantly—sane. Thanks so much for sharing your awesome story! Be sure to check out Angie's blog—Tall Girl Running.

That first race is SUCH an accomplishment. I can remember mine like it was yesterday.

I love how Angie wrote that she runs to celebrate her life, what a great way to express it!