The Best of Both Worlds

While standing in the corral waiting for the start of the 2005 Honolulu Marathon, I saw the oddest thing—a barefoot runner. He had a pair of flip flops stuck in the waistband of his running shorts. I thought to myself, "This guy is a nut!" There was no way this guy was going to finish the race, especially on the roads in Honolulu. You see, they use lava rock in the pavement, so it has a bumpier surface than what we're use to in the states. Well, I saw the guy after the race and he looked great. I asked him how he did, and he finished about 30 minutes ahead of me! He was a native islander and he said he had always run barefoot. I still thought he was a little looney. Oddly enough it was just a few months later that I saw Nike had come out with Nike Free, a shoe they pitched as being the next best thing to running barefoot. Nike suggested using the trainers to help strengthen your feet. They looked a little odd, but sure enough, I started seeing runners, wearing them. 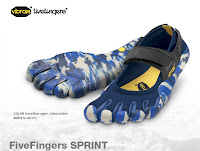 Well, now I've come across something even closer to barefoot running—Vibram Five Fingers. These "shoes" look like gloves for the feet with individual toes and a formfitting quarter-inch-thick sole. They first arrived on the market in 2007 as a climbing shoe, but runners latched onto them quickly. The Vibram Five Fingers is the best of both worlds.
If you've wanted to give barefoot running a try but have been wary of blisters or stepping on something that might harm your footsies, then you may want to give one of these a try.
Posted by RunnerDude at Sunday, March 01, 2009

Very interesting stuff. I know the Newtons also try to mimic barefoot running by forcing a mid foot strike. I'd love to try them sometime, but the price is steep: $175!

Not heard of the Newton. Cool! Just checked them out. Their Website is http://www.newtonrunning.com/run-better/optimal-running-form
The author of Run for Life recommends the Vibram Five Fingers. Thinking about getting a pair. They run for about $75.