Turns out it's not just doing memory games or working crossword puzzles that help keep you sharp as a tack as you age. Running or any kind of aerobic exercise helps boost your brain size and maintain your brain wiring as you age. Or, at least that's what the latest research shows. According to a recent article in the Nutrition Action Health Letter (April '09), about one in four people in their 80's (about one out of three in their 90's) has dementia. Arthur Kramer from the University of Illinois says you can "push yourself back two to three years with six months of aerobic exercise."

For six months, Kramer had a group of people aged 60 to 80 do either 45 minutes of aerobic exercise (mostly brisk walking) three days a week or 45 minutes of stretching and toning exercises three times a week. The members of the aerobic exercise group showed increases in the volume of gray matter in the prefrontal, temporal, and parietal regions of the brain and the hippocampus (the memory region). The hippocampus region is important for "relational memory." Kramer says "that's remembering where you met somebody, where you read something." He says we lose that kind of memory as we age. Kramer and his team analyzed data from 18 trials to see if aerobic fitness training would help improve older people's thinking skills. What he found confirmed his belief—yes, it does.
Runners like us definit 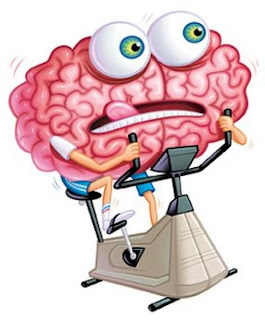 ely have an advantage, because we're use to hitting the pavement, but Kramer says you don't have to run marathons to see the benefits. Some of the study participants could barely walk a block when the study first began. But, by the end of the study they were all walking for 45 minutes and some were even running. He's even studying people who can't walk. He says, "If you can't move your lower body, you can still move your upper body."
Does strength training produce the same result? Well, Kramer says there just aren't the studies yet to prove or disprove that theory, but he goes on to say that anything an older person can do to become stronger and prevent falls and avoid breaking bones will be beneficial.
Not only does aerobic exercicse help with memory, it also cuts your risk of getting diabetes and hypertension or having a heart attack or stroke.
So, get out there and run! Now, where did I put my keys?
Posted by RunnerDude at Wednesday, March 25, 2009