There's More to a Strong Core Than a Crunch 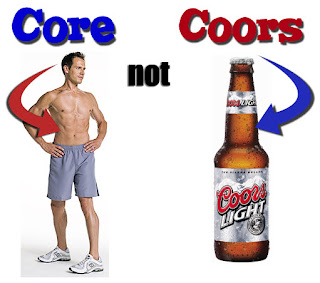 A few days ago, I posted how sitting all day can cause "office-chair-itis"(sitting keeps your hip flexors in a flexed position causing you to feel stiff, even bent over when you try to stand after sitting for a long while). Several exercises and stretches were given to help relax and free-up those hip flexor muscles.

All that talk about hip flexors made me remember that another reason people often get sore hip flexors is from over use. Can you guess one cause of over-used hip flexor muscles? I'll give you a clue. Guys like to do these to get rid of that beer gut before the beach season and the gals like doing tons of these before trying on that bikini. Any ideas? Okay, okay, I'll tell ya. CRUNCHES! Crunches will help give you that defined six pack, but actually a crunch or situp really works the hip flexors just as much if not more than the abs. Stand up. Bend over. Stand straight-up again. You've just flexed your hips. Same motion as laying on the ground and lifting your torso toward your knees, isn't it?

There is absolutely nothing wrong with doing crunches, but they shouldn't be your only source of core work for two reasons. First, because crunches work the hip flexors just as much (if not more) as your abs, you can run the risk of over use and then injury of the hip flexors. Think about it. If you're a runner logging 25-50 miles a week and then on top of that you're doing hundreds of crunches a week, you're working those poor hip flexors of yours to smithereens! Secondly, if crunches are your only source of core work, you may end up with pretty abs, but you won't have a very strong/solid core. The core has a front, a back, and two sides. If all you work is the front, you're going to create a muscle imbalance. Some individuals who do nothing but crunches have actually caused themselves to hunch forward. The abdominal muscles are so tight and the back and side muscles are so weak that the torso is pulled forward, giving a hunched appearance. There's not equal strength in the opposing muscle groups to counteract this pulling motion. So they slump. Probably not the look they're shooting for.

Core work should have a balanced approach that involves all the core muscles—the erector spinae muscles, obliques, lats, transverse abdominis, and rectus abdominis (the abs). Specific exercises can be used to target each group, but you can also get some great workouts hitting all those groups simultaneously using simple equipment like a medicine ball. Planks are a great isometric exercise for core strength and all you need is a mat!

What you want to shoot for are exercises that are functional. What that means is you want exercises that mimic the types of movement that you make is real life. Think about it. How often do you crunch your torso toward your knees each day? Probably not very often. But how often do you twist, turn, reach straight up, reach up diagonally? Pretty often, huh? Everyone can benefit from a stronger core. Your core is the source of energy for your legs and arms. If your core fatigues, then so too will your appendages. This is very important to runners. If you run with a weak core, you run the risk of fatiguing much sooner during an endurance event. Once your core is fatigued and you begin to lose good running form, then everything else will begin to fall apart.

Good news is that solid core work doesn't have to be an every day event. Actually research shows that your core will benefit from a little rest in between workouts. Every other day is a good routine to shoot for, but if you're just starting out, try two times a week (not on consecutive days) and then work your way up to every other day. Another thing to keep in mind is that even if you're not doing an official "core workout" you can still get in good core muscle work during your other workouts. When you're doing those dumbbell curls, make sure your core muscles are engaged and taut. When you're doing a deadlift, engage those core muscles. When you're doing tricep kickbacks, engage those core muscles. Not only will you get a good workout of the core muscles when doing this, you'll also improve your form for those "other" exercises.

For some core workout ideas, check out the video clips below.

Awesome post! I'm going to change some of my core exercises!

Hey Concord Carpenter! Thanks man! Glad you enjoyed the post. Let me know how you like the changes to your core exercises

I got all excited when I saw the Coors Light until you said "not."
Sad :(

I definitely need to do more plank because I am awful at it.

Hey Marathon Maritza! I guess you can have one now and then. LOL! Planks can be tough at first, but keep at them. They really are great for the core. A 50-year-old lady in my personal trainer school did a 20-minute plank! She rocked! My longest is 6 mins. One good thing to try is to keep a plank going for as long as you can, but keep changing the positions...do a front plank, then a side, back to a front, then to the other side, etc.

Great info. I wish I would have read this 6 months ago. (I've been suffering from a hip injury since the end of Dec.) But then again, I probably would have still followed the same routine. It takes an injury for me to really take this informative entry of yours to heart. Thanks. I'm glad I stumbled upon it. Will follow so that I can learn more : )

Excellent post!! I have tweaky hips and do hip and knee exercises at least 4 times a week to keep them untweaky...and me running strong.

It never fails to amaze me how or different body parts all tie together to keep us upright!

Hi Lauren! Sorry to hear about the hip injury. Hope you're better soon. Let me know how the changes in your core routine workout!

Hi C.E.E.! I'd love to know your weekly hip and knee exercises!Always interested in what works for other runners. Thanks!!

Great core work ideas, and you made a great point about hip flexors, running, and crunches that never occurred to me. I am impressed with the lady who can plank for 20 minutes! I was so happy with my 90 seconds...better get back at it.

Great post....wanted to get your thoughts on the video you post with the Chair-ITis post...what is your take on the youtube comments that the stretch is really for the piriformis and is not a hip flexor stretch?
Keep up the great job!
Train Safe
Brian

Hey Brian? I'm not finding where the clip says that about the piriformis? It's all in the same area. I think any kind of stretching of the hip flexor will also benefit the piriformis.

In the comment section if you watch the video on Youtube.
No biggy was just wondering what your take was.
Brian

I noticed a huge difference in my run today -- and this after only ONE week of planks (I also added the roman chair at the gym). I am so looking forward to seeing how much better I can run once I've got those planks down (I find them extremely difficult right now).

Hey Lauren! That's awesome! Thanks for the update! Keep it up!