The S.B.B. Rule—A Benefit of Running 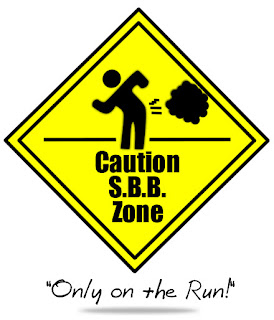 Running has a lot of benefits, many of which I've lauded on the blog—heart health, aerobic fitness, overall fitness, healthy competition, running buddies. The list could go on and on, but one of the unwritten, not often talked about, but every-runner-knows benefits is the S.B.B. Rule Not ringing a bell? Maybe this will help....Spit. Burp. Break Wind. Every runner knows that while on the run, it's entirely acceptable to spit, burp, and break wind. It just happens. No way around it. If you run, at some point in time, you're going to need to S.B.B. and oh yea, don't forget the SN (Snot-Rocket)!

Usually these bodily functions occur on the run with little fanfare, because of the understanding of this unwritten rule. Well, in most cases. If one of the guys in my running group (let's call him Lester) had Indian food the night before our run, we usually give him a good ribbing (and keep our distance). Ha! Anywho, normally, the 5th-grade humor is left at home and we all just know it's going to happen to us all at any given point in time, especially on those really long runs.
Running etiquette says that a runner pulls to the side of the pack when he/she needs to spit or launch a snot rocket. If it's a windy day, the runner needs to pull off to the side as well as navigate to the back of the pack as to prevent a running buddy from becoming the victim of backdraft splatter. And if you have to flatulate, well, being in the lead of the pack is probably not the best position....pull to the back of the pack. But as long as you adhere to these few rules, no one cares about S.B.B.s on the run.
I feel, however, that I need to make a few clarifications, especially for the newer runners. This unwritten S.B.B. rule only applies to the great outdoors. Now, we all have ooopsies while on the treadmill at the gym, and those are forgiven. But, restraint must be exercised while in enclosed areas.
A recent treadmill run at the gym was the real catalyst for this post. I arrived at the gym at 5:00PM not really expecting to see an open treadmill. But low-and-behold, right in the middle of a sea of occupied treadmills was a free one on the second row. Well, I quickly sprinted for the free machine. After hopping on and doing a minute or so of brisk walking to get warmed up, I noticed an odd odor.
My first reaction was to take a whiff of my own workout clothes. Nope, not them. They were clean. Yet, this odd odor was getting stronger. Then I heard that tell "tail" noise....a toot! Not one, but a rapid succession of them. Toot, toot, toot. tootie-tootie-toot!
Okay, I quickly realized why my prized treadmill was free. It was downwind of a toot queen on a treadmill directly in front of me! This lady was letting them fly faster than a sniper with a machine gun! Difference being this "sniper" wasn't hidden. She had on ear buds and I guess she was thinking, "Out of sound. Out of smell." NOT!
Well that was the fastest 4-miler I've ever logged on a treadmill. A PR. No lie! But I don't recommend it as a training tactic.
-
So please, remember that when you're on a treadmill, you're not really going anywhere. There's no sudden breeze to whisk your fowl air away. And please have pity on your fellow runners who may be down- or side-wind of you. The S.B.B. rule only applies when running in the great out doors!
It's kind of funny. I went back to the gym the other day, and the same lady was there. And guess what? There was a vacant treadmill behind her again. I used an elliptical machine that day.
Posted by RunnerDude at Wednesday, March 17, 2010

I have been hoping someone could talk about it! I don't suffer of this too much, but I restrain myself of breaking winds, (LOL) completely in a group run... I haven't heard (or smelled) any other runner doing it, so, I guessed that it was completely un-polite and out of the rules of running...
But it’s good to know that it’s OK and it’s natural… :)
GREAT POST RUNNER DUDE!!

O my man, you nailed it. I was actually thinking about posting something relating to this treadmill experience, but thought it would thwart my little list of readers away. lol. I think I might have to reconsider. My thoughts?.......Let it rip, as long as there is not a R.I.P.. I believe I asked a question a while back in were you suggested BEANO? lol. have a good one man!

I gotta say that the S.B.B. rule is one of my favorite parts of leaving the treadmill at the gym and running outside again...

@Otto: if you can smell your fart while your running you're either running way too slow, or you need to go to the doctor and get checked out ;)

I think I am glad my treadmill is in my house! I must say, I am a regular at the SN. When I first started running, never thought I would do it, but then, once you've tried, there's no going back!

For the spitters, I ask you keep in mind your barefooted friends. I know, my feet, my responsibility, but if you could aim for off the path, that would be much appreciated.

Best article on farting I have read today (make that this year!)

OOH that is hilarious!!! I'm sorry but she may not hear them but she has to feel them-- and maybe do a safety listen??? Just in case?? wow. And I thought the guys that thundered on the machine like he was trying to break it was difficult to run next to. Good job keeping with your run while downwind of THAT

I actually planning on posting about fart etiquette the other day. I normally run on my own but in a group I noticed a guy "pull over" and make a pretty impressive succession of trumpeting. I found it humorous, yet absolutely acceptable. Considering I was behind the fellow, it gave me a new appreciation for fart etiquette.

As for the treadmill incident, God have mercy on that sickly woman :)

One more reason that I avoid treadmills.
Great laugh. The advantage to running in cold weather is you have layers to try to hide snot-rockets, which worked until hubby once pointed out that my pants were filthy when I walked in the door. When he realized what it was, he was speechless.

That is one of the funniest posts I've read in a while. I hope the toot queen is a reader.

This is so funny. I do all those things (I'm ashamed to say). HOwever, having been the victim of a snot rocket by a mere pedestrian on the street, I am always careful to check behind me before performing any of the aforementioned bodily functions.

Thanks for the feedback on the speed training. Part of my problem is I am fast for short distances but not for duration. In fact, I am really fast for short distances. Think sprinter trying to run cross country. We've adjusted my speed workouts to address this and will hopefully see some progress. All your points were well made and well taken, thanks!!

Hi everyone! Thanks for all the comments! While this story wasn't pleasant to experience, it was a blast to write!(no pun intended) LOL!

Hey Regina!
Glad some of the info was helpful. Sounds like you may have a lot of Type 2 muscle making you fast! That's great! Does make it harder for endurance over longer runs though, but sounds like you guys are on top of it with you modified workouts. Keep me posted!

"...letting them fly faster than a sniper with a machine gun!" OMG, that is PRICELESS. Of course, being a LADY, I can't relate to any of these things. Nope. Not me. ;)

LOVE this post. Too funny. See, people don't get behind me on a treadmill because I fall off of them at alarming speeds.

OK I am not sure how I missed this post, thank you, thank you for sending it to me. I needed that laugh really bad. Being a spitter, I also needed the lesson of when, where and how to spit. My buddies will thank you!