I've been running with my friend Will now for close to 7 years. He's one of the "originals" of my running group—The BlueLiners. Even though I've run with him most Saturday's over the past 7 years, I didn't know some of the cool things that Will shares in his story below. Here's Will's amazing running experience in his own words: 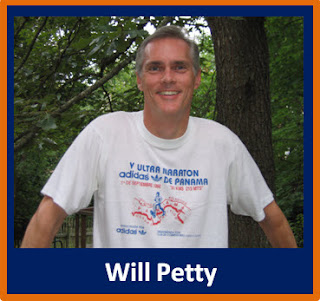 I have run in twenty-one U.S. states and logged over 24,000 miles, but my most exotic running location was in the country of Panama. Roughly 20 years ago, my company at the time, AT&T, was hired to install systems on some of the U.S. military bases near Panama City. My first trip down there was in 1990, only a few months after the U.S. invaded Panama to capture Manuel Noriega. There were still vivid reminders of the brief but intense conflict all over the city, from bullet-riddled or shelled-out buildings, to the stories told by some of my co-workers who hunkered down in their apartments in the city during the fight.

My first run in Panama originated from the apartment I shared with two of those co-workers during my first trip. They lived on top of a big hill in the city, and as I wound my way down the hill, past fenced-in houses with armed security guards, my co-worker stood on the balcony, watching me and shaking his head. I remember passing some young boys playing as soldiers in one yard, saying “You be the American, and I’m the Panamanian.” When we ate in restaurants, it was often under the cold gaze of a guard with an automatic rifle.

Over the next year and a half, I made a total of eleven trips to Panama. I had a running buddy, Mike, who was an Army major working with us as an intern. We did most of our runs after work on one of the U.S. bases, largely because the traffic in the city was a nightmare, plus we didn’t feel totally safe in venturing out too far from our hotel. The heat and humidity were astonishing, and we would finish every run drenched in sweat. But my most memorable experience happened one night when I wasn’t even running.

One of our project managers, Bill Keane, was an avid ultra-marathoner. He managed to arrange some meetings in Panama to coincide with a 50-mile race that was run across the Isthmus, parallel to the Panama Canal, from the Caribbean Sea back to the Pacific Ocean in Panama City. Another lady and I comprised Bill’s support crew. The race started at sunset in Colón, which looked to me like a Barbary Coast pirate town, then followed a narrow road that wound through a rain forest most of the way. We drove our little rental car alongside Bill, handing him snacks and de-fizzed Coke, and talked and laughed all night in the pitch-dark countryside, all the while hearing strange and sometimes frightening jungle noises. At one point, maybe 30 miles into the race, a dog ran out in front of Bill, startling him and causing him to step off the road into a deep puddle. Bill’s shoes and socks got soaked, and since he didn’t have a spare pair, he soon developed huge blisters on his soles and eventually had to quit before the finish.

I have some fond memories and one really cool race t-shirt from my experiences in Panama.—Will Petty, NC

Will is one of the reasons I've gotten faster over the years. He's a great guy and puts on a darn good Great Pumpkin Run 5K too! Thanks for sharing your story Will!
Posted by RunnerDude at Tuesday, September 22, 2009

That is just too cool. Runners have the best stories.

Thanks for the great story...

Wow !! I was glued to the computer screen just by reading his story. For me, I don't think I have the ball to go out for a run when all hell break loose like in Panama back then.

Hi Ted! Yep, that's what I'd call dedication to your sport!

Great story! I'll have to send my mom the link to this entry, she grew up in Panama.

Talk about dedication to running!