I Could Have Been an Olympian...100 Years Ago 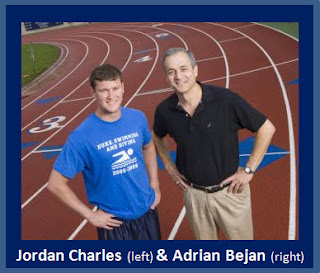 Well, it looks like my hopes for Olympic Gold happened about 60 years before I was ever born. This revelation came to me during my morning ritual of reading the News & Record (our local paper) and munching on a whole-wheat bagel with cream cheese and sipping on my cup-a-joe.

The headline "Bigger Means Faster" caught my eye. The article (by Edward G. Robinson III of The News & Observer-Raleigh, NC) reports on a Duke University study that says modern athletes are larger than their predecessors, which translates into faster times. Basically it says that an animal's maximum velocity on land and in air and water is proportional to its mass—bigger should move faster than smaller.

The researchers Adrian Bejan and Jordan Charles propose that eventually track and field and swimming may need to create weight categories similar to boxing in order to level the playing field.

Although the evidence is solid, many don't think we're quite at the point to where the sport needs to be changed. There are still shorter runners beating taller runners. It will definitely be interesting to see if this new theory holds true in the 2012 Olympics.

If you want to learn more about the study [click here].
Posted by RunnerDude at Sunday, August 02, 2009

Rowing is one racing sport that does have weight categories in it.

Theory being that a slim, fit guy just can't muscle through the same way that bulky muscular ones can. I know that as a 130 pound lightweight I never could compete with the 210 pound heavyweight girls gutting it out.

There may be some further size / weight vs athletic achievement studies related to rowing out there due to the categories, which can translate to running as well.

Hey RunningLaur! I never knew that about rowing.Does make you wonder why something similar hasn't happend with running.

I am starting to see "Clydesdale" categories at some races for heavier runners, but I think that this is intended to give the heavier runners a chance since they can't compete with the lighter ones.

Interesting perception. It will probably be a while before many sports change to weight / height class divisions.

Hey EZEthan and TC!Yep, it will be interesting to see if anything changes in the years to come. In their research, they used their theory to predict the winners of many of the 2008 Olympic track events. I think just about all of their predictions ended up being correct. Kind of cool. Hope the Bookies in Vegas don't get wind of this! LOL!

I also am 5'6". My wife is telling me I am shrinking too. I am in serious trouble.

Hey Running Through Life! You and mae both! LOL!

Thank you for these very interesting comments and new ideas.

The full J.Exp.Biol. article is available in the first box at www.constructal.org

The comment about Las Vegas is also correct. We completed this article and submitted it for publication two months before the Beijing Olympics, before Usain Bolt and Michael Phelps.