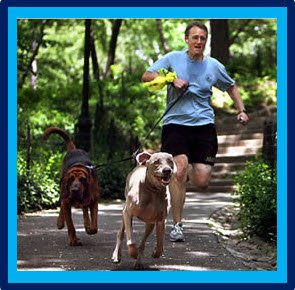 As cited in yesterday's post, unleashed, loose, and stray dogs can be a real danger for runners. But, dogs can also be a great source of companionship for a runner. Most dogs love to run and most love to be with their owners. So, what a great fit. Unfortunately this would never work for me and my beagle, JayJay. He's too interested in every moving critter and marking left behind by said critters. My running with JayJay would consist of lunge, pull, yank, yell and repeat. However, I see many a runner and his/her faithful companion running happily on the greenways I frequent. There's one runner who has the largest Great Dane that I've ever seen. His head is at my chest level. If needed, his owner could hop on his back and ride the last few miles. Funny, many times the dog looks a lot less winded on the run than the owner.
Just as you think about your safety and comfort on a run, the same should be done for your dog. Even though most dogs are natural runners, there are a few precautions a runner should heed before hitting the trials with Fido.
1. Check with your veterinarian—Just as you should consult with your physician before starting an exercise program, the same should be done for your dog. Fido could have a medical condition that running may aggravate. Also, some breeds may not be suited for running or for running at the speed you may expect from the dog. 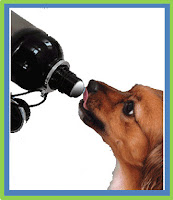 2. Ease into it—After you get the doc's okay, ease into running with your dog. Remember your first time out? Depending on the fitness level of your pooch, it may take several runs for him/her to acclimate to the new exercise. Let your dog set the pace. This will help you evaluate his/her fitness level.
3. Hydrate—Just as you need to hydrate before, during, and after your run, so does your dog (especially in the heat and humidity). There are even water bottles available specifically made for dogs! Check out the Pet Water Bottle and the Lixit Thirsty Dog Water Bottle.

4. Choose the right breed—Most pooches can go for a short jaunt around the block, but if you're a serious runner, make sure you select a breed that will enjoy running and is capable of handling the demands of running. Running with a puppy isn't advised. Best to wait until their full grown before taking them on a serious run. Some dogs due to their shape and physiology just aren't meant to handle the stress of serious running and I'm not just talking about toy poodles. For example, Border Collies are prone to hip dysplasia and Bulldogs' breathing system is not great for a lot of aerobic activity. It just makes sense that a tiny dog can't run as far or as fast as a larger one and running's probably not the best thing for older dogs. Mixed breed dogs tend to be less susceptible to genetic problems. I bet there's a medium-built, short-hair dog weighing around 50 to 70 pounds at the shelter that would love for you to take him/her home and for a run.

5. Be aware of distress signs—Most of the time a dog will want to keep on running long after you're pooped out. However, if your dog suddenly lays down, stops and won't go any further, and/or appears to have difficulty breathing, stop immediately and seek help at your emergency veterinary clinic. Dogs can suffer heat exhaustion and heat stroke just like humans can.

6. Check of injuries—Unlike you, your dog doesn't get to wear running shoes. Frequently check your dog's foot pads for abrasions. Also, be cognizant of where you're running. Blacktop may be a softer surface for your run, but it may be burning hot to your doggy's feet! 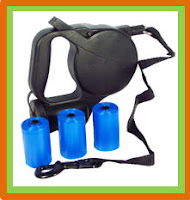 7. Use a leash!—Not only is this keep your dog from annoying other runners and walkers, it also keeps your dog safe. Even the best trained dog may be tempted by the passing squirrel. Many an unleashed dog has suddenly bolted across the street only to be hit by an oncoming car. There are lots of varieties of leashes on the market to choose from. The retractable versions are great for runners, allowing the dog run ahead but also providing the owner the ability to quickly reign in the dog when needed. Some retractable versions even come with a built-in waste bag dispenser. Speaking of which...
8. Pick up the poop!—It never ceases to amaze me when I'm running on our paved greenway the amount of dog poop left right in the middle of the path. Keep in mind that our local park even provides dispensers of animal waste baggies at the entrance. If you're dog is a pooper, please be prepared to collect and dispose of the waste. Just letting them poop on the side of the walkway isn't a good idea either. Remember that many runners like to run on the side of the pavement for a softer ride.
Posted by RunnerDude at Thursday, July 09, 2009

Ta da! Now you're talkin'. You do read my blog, don't you? Especially yesterday's? Running with a dog is essential in my book. ;)
Off-leash is great for you and the dog as long as the dog is well behaved and follows voice commands. The running experience is then most fun for both of you.

I love this post, so important to be careful with your dogs in the heat. Several years ago when my lab was about 2 years old, we were running our usual 3 mile loop but it was too hot for him and he collapsed from heat stroke. Thankfully, I was able to get him into the shade and give him water but it was extremely scary... and a huge wake-up call to be more careful in the future!

Hey Jo Lynn! Of course I read your blog! Well behaved....hmmmm so, how does your dog handle you? :-)

Hey Amanda! Glad your dog is okay. If you're like me, until recently I just assumed dogs are naturally outside, so they should be able to handle the heat. Boy was I wrong. Glad to help get out the word.

In response to your question: Boomer is a Catahoula Leopard Dog mix. Probably mixed with Rat or Jack Russell Terrier. He's a runnin' machine.
How does he handle me? I believe he has eyes on the back of his head. ;)

Hey Jo Lynn! Boomer's a cool dude. His coloring is really unusual. Like it. Great you have such an awesome dog. Man, the area where you run is beautiful!

I run with 2 dogs... my eskimo mix can only run at a 11 min pace, so he goes on my longer runs, but my black lab can do a 8min- pace so we do speed work. He also craps a lot when we run... running with a bag of poo is not cool!

I wonder if Dena has figured out how to run with one of her cats yet?

Hey Will! If anyone could it would be Dena! I'd love to see a runner flying by with a cat on a leash. LOL!

I run at a lake that often forces me to dodge goose poop- dodging dog poop is not something I am interested in. Usually when I see people not picking up their dogs poop I give them a death stare- but unfortunately I am small and not scary at all. What I would really like to do is throw it at them!

If I'm running and there's an off-leash dog, you can bet it will chase me! Even if it doesn't, I worry that it will give chase until I'm well away from it. It scares the heck out of me and totally messes up my run. Dog owners (and we have three!) really shouldn't put others in the situation of hoping for the best when we encounter an off-leash dog. Please, leash 'em up!

(Of course, I was chased by two big loose dogs just this morning, so my fresh freakout might be showing a little!)

Great read! My dog is my running buddy and she is great. Now that summer is here, I make sure my route hits the ocean half way and at the end - as soon as she sees the ocean, she takes off for a nice swim and then catches up. Sometimes I join her!