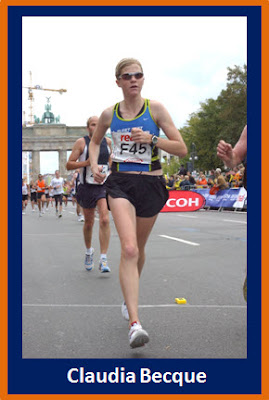 A recent post—"A Down Economy Equals an Up in PRs"—talked about the spike in runners setting PRs as a result of having more time to train due to job loss. The source of the post was a recent Wall Street Journal article. The article mentions Claudia Becque, a runner who set a 2:44 marathon PR, cutting an amazing 14-minutes off her previous PR. I was so intrigued by her accomplishment that I tracked Claudia down and asked her to share more about her story.
RunnerDude: When did your journey to qualify for the Olympic Marathon Trials begin?
Claudia: My journey to qualify for the 2008 Olympic Marathon Trials began in the summer of 2007.
RunnerDude: How did that go?
Claudia: I trained with a another qualifier and followed her training plan and had hoped to qualify at the Berlin Marathon in the fall of 2007. I never fully adjusted to the travel and had stomach issues during the race, falling short by 11 minutes and devastated that I had trained so hard and it just wasn't the right day.
RunnerDude: Besides the travel and stomach issues, what other factors do you think may have contributed to you not doing as well as you had hoped?
Claudie: With my high mileage and my full time job, I was so tired and had left my hard work on the lakefront path in Chicago (where Claudia trained).
RunnerDude: What happened after Berlin?
Claudia: Through a close friend I met my current coach, Tom McGlynn, founder of Focus-n-Fly, a month after Berlin at the Men's Olympic Trials. Instantly, I knew he'd be the right fit for me and could help me accomplish my goal of qualifying for the trials. Unfortunately, we didn't have many marathons to choose from to get in adequate training, but I was ready to give it all I had.
RunnerDude: That’s great that you were able to find a great coach and jump right back in to training. You still had work to juggle when your new training began. How did you deal with that?
Claudia: In January 2008, I received a phone call that my position had been eliminated. I thought the timing couldn't have been worse as I had just bought a townhouse and was planning my wedding. Luckily, within a week of being let go, I was offered a similar position with a different company. Since I had received a severance, I chose to delay starting by a month and a half to focus on getting some solid training accomplished.
RunnerDude: How did that benefit your running?
Claudia: That gave me a glimpse of what running full time looks like. I was running twice a day, blocking off time to stretch, do my core work, and nap before my evening run and allowing me the much needed rest I had lacked going into Berlin.
RunnerDude: So, how did it go on race day?
Claudia: Fortunately, I had done all of my key workouts and was able taper as I eased into my new job without any added stress. As March 2nd (race day) arrived, I knew I had tapered and felt refreshed and ready to go. By 10am (that morning), I was an Olympic Trials Qualifier, knowing that seven weeks later I would be toeing the line with the fastest women in the US. I was extremely fortunate that I had the flexibility to take the time between jobs without the stress of knowing where my next job would be.
RunnerDude: What’s next for you in running?
Claudia: If everything goes well, my goal by 2010 is to be working less hours and focusing on 2012.
I look forward to following Claudia's running and with her determination and drive, I have no doubt we'll be watching her in 2012!
Posted by RunnerDude at Wednesday, July 29, 2009

This is fascinating! What a great interview! Thank you for the inspiration this morning :)

This is pretty darn cool. Thanks!

Great interview!!! So cool you tracked her down and got her to share her story! So inspiring! Congrats to Claudia!

Great interview! It's refreshing to see how accessible real athletes are.

Hey Caroline!You're welcome! Thanks for reading the blog!!

Hey Ulyana! Thanks for the feedback!

Hey Morgan!Thanks! I was so happy I was able to get in contact with Claudia and that she was so willing to share her story.

Hey JonFMoss! Welcome to the blog!I agree. Was so cool to find her and get her story.

That is really cool that you got to interview her! Great story and such an inspiration. Good luck to her and her goals! :)

I really loved the focus and grit in this story. Good stuff!

That is so awesome that getting canned from a job could open up the possibility for doing something really incredible!

Hey David! Cool! Thanks! Heading to your blog now.

H NoMeatAthlete! Yep, at first when you're let go, you're terrified but when the numbness clears you realize that maybe this is the time do reach for that dream. Definitely looks like Claudia took that approach. Kudos to her and the many others who've tragedy into triumph.

Great interview! It's always fun to read about regular people who end up accomplishing amazing things.

Hey Ron! Thanks man! Was really cool to be able to contact Claudia and get her story.