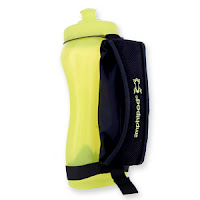 elf well hydrated, especially on long runs. Runners tend to focus more on hydration during the summer months when (if they’re like me) they sweat profusely. Just like in the summer months, your body still heats up and fluids are lost through sweating.

If you’re an avid runner, keeping yourself well hydrated (summer or winter) should be an ongoing process. I’m bad about only thinking about hydration about an hour before I run when I gulp down a bottle of water. But if you’re doing long runs of more than 8 miles you should actually be thinking about hydration a few days before. If you’re well hydrated then your urine should be pale in color and you should be voiding around 6 times a day.

Christine Luff from About.com: Running and Jogging suggest drinking 16 to 24 ounces of water or other non-caffeinated fluid about an hour before running. That will give you time to void before you run. You can drink another 4 to 8 ounces right before running. 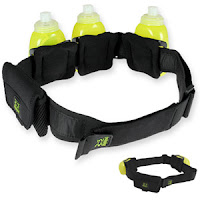 On long runs carrying water and/or sports drink along on the run is often a good idea. During the summer I like using the handheld bottles. I often run shirtless and the belts tend to irritate me. During the winter the handheld bottles are too cold to handle, so I wear a belt system. I’ve tried several brands of hydration systems, but I’ve found that Amphipod’s products work best for me. They have a handheld bottle that’s flat and is easier to hold than the round bottles. They also have belt systems where the bottles snap on and off, making it easier to use while in motion. What hydration systems have worked well for you?
Posted by RunnerDude at Thursday, November 27, 2008