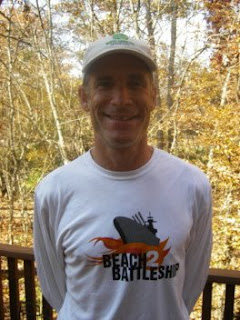 Rich's Experience
The race went surprisingly well. Except for colder than expected air(39 degrees) and water (67 degrees) on race morning, the conditions were perfect. The swim started at the south end of Wrightsville Beach and ended at Sea Path Marina near the Wrigthsville Beach Town Hall. The cold water caused my legs to cramp up several times on the swim. It also left me a little loopy at the end of the swim. It was difficult to just stand up at first and very difficult to change into biking gear—hard to think—hard to use your hands. To make matters worse, the changing tent was packed—chairs around the side and other than that—standing-room only. Luckily, I was able to get a chair to sit on after several minutes. That transition took me almost 15 minutes. The bike was 99% flat and smooth with little to no wind. Temps for the bike started around 40 degrees but must have ended in the high 60's to 70. I stopped three times on the ride—first at about 40 miles to peel off some clothes; next at 60 to peel more clothes and mix up some more drinks (Accelerade), and one more with about 20 miles to go to call my family and give them a heads up that I would be in transition soon (use of electronic devices is prohibited, so please don't tell the refs!). My biggest fear was the run, but it went well too. None of my intermittent hamstring, knee, or hip issues cropped up. I kept a fairly consistent pace throughout. I walked only occasionally at aid stations at which I ate mostly gels, orange wedges, and/or pretzels. I carried my own drink. My parents were at the T2—the battleship—so I saw them at the start and halfway points of the run (it was two 13 miles laps). My wife, Janet and son, Dave were in downtown Wilmington at miles 3 and 16. Dave ran with me a few blocks each lap. All were at the finish. On the first lap, I was just looking forward to finishing it and figured that if I made it at least that far I could consider it a successful outing. Then, once I actually got a few miles into the second lap, I knew I would finish one way or another—I certainly wasn't going to turn around or backtrack! On the second lap, Dave met me near the 24 mile mark and ran over the bridge to finish with me at the battleship. I felt pretty good at the end. But the next morning it was hard to get out of bed or even roll over. I guess the 6 Ibuprofen I took the day before had worn off! I'm feeling pretty good now. It was fun, and although I wouldn't say "never", I currently have no plans to enter another.

Rich, I think I speak for all the Blueliners....awesome job and what an inspiration! You da man! Lucy and Ben do an amazing 40-mile ultra trail marathon. Andy sets a marathon PR. Kelly qualifies for Boston and then Rich completes a full IronMan! What's next for the Blueliners?
Posted by RunnerDude at Sunday, November 09, 2008

Email ThisBlogThis!Share to TwitterShare to FacebookShare to Pinterest
Labels: ironman

Rich - you certainly have sole ownership so far among Blueliners of the "No More Ironman" club if you want - you earned that right! Congratulations again.