To Eat or Not To Eat? That's Often the Question. 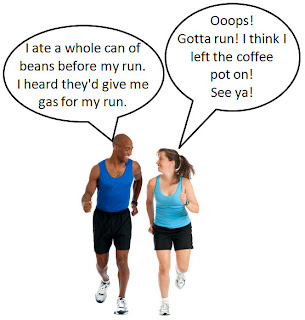 Fueling on the Run: For runs lasting more than 60 minutes, it's a good rule of thumb to take in 30-60 grams of carbohydrates every hour. Use the chart below from 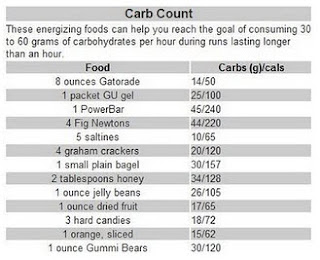 Runner's World to help you select some foods good for during your run. Be careful when using sports gels. There’s nothing wrong with them, but if you’re using them along with a sports drink, some may find themselves having stomach issues. Both are packed with carbs and usually the carbs are of the simple sugar variety. While your body will need to replenish is glycogen stores during the race, you don’t want overkill. Everyone is different and there’s no one cure-all, but for some carrying a bottle of water to use when taking a gel works well. Some may find that they can continue drinking only water throughout the entire run, if the gels they’re using contain carbs and essential electrolytes.
I’ve discovered that 100% coconut water contains the right amount of carbs and electrolytes for my long runs. I have problems with calf cramps and coconut water naturally has 15x the potassium of a banana and 2-3x the amount of potassium as most sports drinks. Others do better to drink water, take an electrolyte replacement tablet and then pack some pretzels, crackers, jellybeans, or Fig Newtons for their carb source. I have one running buddy that takes an Uncrustable along. Uncrustables are those little round frozen peanut butter and jelly sandwiches with the crimped sides. He says it thaws on the run and by the time he needs one later in the run it’s ready to eat. Like I said, everyone is different.
Post-run Refueling: Eating 300 - 400 calories with a 4:1 ratio of carbs and proteins within 30-45 minutes after finishing your run will help ensure a quicker recovery. During a long run, you deplete your glycogen stores as well as create microscopic tears in your muscle tissue. Eating a carb/protein mixture helps to restore the glycogen and repair those tiny tears which is the muscle-building process.
Some good post-run eats include:
What are some of your favorite pre-, during-, and post-run eats?
Posted by RunnerDude at Monday, July 26, 2010

GREAT POST - well they are ALL great but I also suffer from what to eat and what not to eat - my longest run so far has been 10 miles - I am training for the Philly Half but despite a knee injury I have been sidelijned since July 5th GRR Hoping to try out the knee this week!

Ok sorry guess the mom in me went on a rant! LOL

Pre-Run - I sometimes do a cereal bar, kashi bar or a waffle or light bread with peanut butter or almond butter.

Post-Run - is typically always a Light Soy Chocolate Milk - if I am at a race its usually a banana and or a cereal bar!

LOVE LOVE LOVE your Blog - thanks for everything!

Hi Danielle! Thanks for the feedback! Greatly appreciated! Hope the knee is better soon and you're back on the road!

Thanks for this great post. I'm starting to freak out about a grueling 50k in 3 weeks. You answered my main question. I'll do what I'm already doing: gels and a peanut butter cliff bar here and there.

I tried the cocunut water, and it wasn't too bad. But I think I'd have to carry too much for a 31 mile run (when I'm already carrying water plus all my other essentials). Do you think just one container of coconut water would do me any benefit on this long of a race? I can always put one in my drop bag. (I'm a massive cramp sufferer, and have been doing for pedialyte, nuun tablets and/or enduralytes and/or salt).

hmmm...will def have to check out the uncrustables next time i am at the store. the whole wheat with pb and honey sounds wonderful. defrost on the run? PERFECT! thanks again!

Hi Lauren! If you've tried the coconut water and it seems to work for you, you may want to swap out one of the water bottles for the coconut water. But if the pedialyte and nuun tablets work for you, you can stick with that. Will you have any support crew along your route? If so, maybe they can have some of your supplies ready for you so you won't have to carry everything with you. If you're like me though, you're running solo and you're lugging everything along with you. LOL!

Great post! On my blog I recently wrote-up my own Chicago Marathon fueling plan (http://www.runinamerica.com/2010/06/chicago-marathon-hydration-and-fueling.html), covering some of the same ground. I'd never heard about Coconut water, though! where do you buy it?

You seem to be hitting a lot of the topics I've been interested in lately! Thanks! Food is such an issue and I feel like I need a dietitian just to get it right! I appreciate this post : )

Great post! I've been experimenting lately to come up with combinations that work for me. This weekend was my best so far with a banana pre-run, then shot bloks and gatorade during a 15 mile run with a big glass of chocolate milk and a regular breakfast post-run.

First, great topic it is something that every runner has to go through. And sometimes has to change has we get older.

Post-Run: Depends on the workout, most day’s fruit and yogurt, others Wheates w/ fruit and milk.

Lauren
I like the benefits of the coconut water but not real big fan of the taste. On my long runs I just blend the water and the coconut water--usually 60-40 in all my water bottles. This seems to work well for me--and better than the gatorade from my perspective.

I love seeing that jelly beans have carbs! They are my favorite afternoon pick-me-up when I'm at work.

Hi Gene! Let me know if you try them and how they work for you.

Hi Mark! Great post on your blog. I've posted several times on the benefits of coconut water. Here's the most recent. http://ncrunnerdude.blogspot.com/2010/06/mother-natures-sports-drink100-coconut.html
I my city, I find it at Earth Fare. They'll actually order it by the case for me and I get at 10% discount. The other day, I actually found in a convenient store!

Hi Maureen! Thanks for the feedback! Glad the posts have been of help to you. Are you training for something now?

Hi abbi! It's always a work in progress, but sounds like you have a great handle on what's working for you. Good luck on your long runs. What are you training for?

Hi bpederson!Great food choices. I need to try the OJ pre-run. That's a good idea. I already have the coffee. That's a given. LOL!

Hi Stan! What brand of coconut water are you using? It's funny. It's all 100% coconut water, but I have noticed a difference in taste from brand to brand. Lately I've been using the O.N.E. brand. Tastes pretty good. Vitacoco makes one and so does NAKED. That's good that diluting works for you. I sweat so much though, that if I diulte the coconut water or any sports drink it waters down the electrolytes too much, so that's not an option for me. Darned, overactive sweat glands! LOL!

Hi Cynthia! Yep, jelly beans are basically pure sugar so they're definitely carbs. Simple carsbs. They're good for during the run (if they don't bother your tummy) because they digest almost immediately getting the fuel to your muscles ASAP. Jelly Belly makes a brand for runners called Sports beans. I think they contain electrolytes too.

Now if you're not running and just lounging around, those little jelly beans may end up on your thighs or in my case my love handles. LOL!

No crew, I'm a lugger -- just a drop bag at mile 16. I haven't found the perfect solution, though what I'm doing has cut cramping drastically. I'm carrying water on my back and will have one bottle that I'll fill with water at the aid stations & drop nuun or powdered pedialyte in. I got to thinking from your post, that I could put some cocunut water in the drop bag, then run with that and chuck in the trash at the next aid.
Thanks again for all the advice. I'm gonna try the uncrustable on my long-run this week : )

I have found drinking the coconut water the morning of a long run or the day before a race helps me out. I can, then, even in the heat, get through a race with just water.

Pre-race at first was always oatmeal. My first races were in cooler temps here in the northeast. Can't stomach oatmeal in the summer, though. Now, pre-race or long run tends to be whole wheat toast and Naturally More PB.

I have decided I really like Tri-Berry GU for races or long runs over 12 miles. I don't use GUs very often, though, as I forget to stock up on them. I have found, at a local grocery, Sports Beans from Jelly Belly. These are like jelly beans but also have electrolytes in them.

I am still working on what is good in the middle of those long runs as I work through my marathon training.