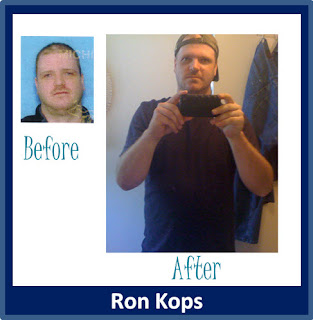 I got to know "Ron the Runner" through Twitter. He's a man of few words, but he has such an awesome story to tell, that I asked him if he'd share it with you. In his own words, here's Ron's story.

My name is Ron. I decided in June it was time to get back in shape. After losing my wife to cancer, I spent a good year just sitting on my ass drinking all day. I knew how upset she would be to see me that way so, I stopped drinking, stopped smoking, stopped drinking soda, etc.. I have since lost 42 pounds and taken up running, so far I am horrible at running, my best run so far has been one mile, but I keep trying, eventually I will get to the point I can run 5k, hey maybe...—Ron Kops
Ron sent me his story back on August 30th. In just a month, not only did Ron surpass his 5K goal, he ran his first 10K (The Alminians 10K) this past Saturday! Here's Ron's posting about his newest running accomplishment on his blog—Ron The Runner: From Couch Potato to Runner.
"I didn't get the sleep I wanted the day before, Only had about 3 hours in two days. It was cold raining and a 2 hour drive away. I was questioning WTH I was thinking getting into this ! It was a fairly small race not a lot of people there. I was really nervous, I don't at all think of myself as a runner. I don't even run outside unless I have to... It was a very narrow course, I think I ran faster just because of that, defiantly my fastest time. Sadly my knee and groin are paying for it now ! but I did win entry into next years race series. so I can look forward to the same pain next year"
Ron now has the VASA Trail 10K in Michigan as his next quest to conquer. You da man, Ron! Keep up the great job! Rest assured your wife is very proud of you and your accomplishments!
Posted by RunnerDude at Sunday, October 04, 2009

Email ThisBlogThis!Share to TwitterShare to FacebookShare to Pinterest
Labels: beginning to run, couch to 5K, Life-changing

Great story to read on a rainy Monday morning!!!

Hey, I will also be running the VASA trail 10K in Traverse city!! It should be a fun race, Running Fit events are always crazy and fun!

Thanks for sharing your story with all of us! Good Luck and have fun at VASA!!

Great job, Ron! Your wife is proudly looking down on you. When I first started running, I could barely run 1 mile without huffing and puffing! Keep at it and make it part of your lifesytle. Then, running will be just as easy as breathing.

Hey Lorenda! What a small world! Hope both of you have an awesome run!

Hey Thomas! Couldn't agree more! The more you stick with it the easier it gets. You'll still have those challenging days, but the running will become more and more enjoyable the longer you stick with it.

I just ran the Big House Big Heart 10K yesterday morning in Ann Arbor, it was AWESOME! And I too, only became a runner this year. It was tough at first, but I have come to LOVE it. I remember struggling to run for more than 5 minutes at a stretch on a treadmill, but with patience and determination, the endurance came. And now? I'm getting excited for the Grand Rapids Half Marathon I'll be participating in on October 18th!!!! Go Ron go!!!

Hi Grace! Welcome to the blog! Awesome job on your running and you're gonna blast away that half!

That is such a great story. A few years ago I could not run a mile without throwing up. Now I am about to run my second marathon. Great job Ron!

Hey Grace, I also ran the BHBH 10K! Gotta love Running Fit events! It was awesome to finish in the stadium! The Grand Rapids marathon/half marathon is fun.
Good Luck and have fun in Grand Rapids!

dude, thanks for sharing. Ron is awesome. takes so much courage to get up and make a change. and even more so after a terrible loss. Ron's story is motivating and inspirational.

This is very inspiring. I believe that I would spend much longer than a year doing the same very destructive things that Ron did. Good for him!!