Let's Cut to the "Chafe" 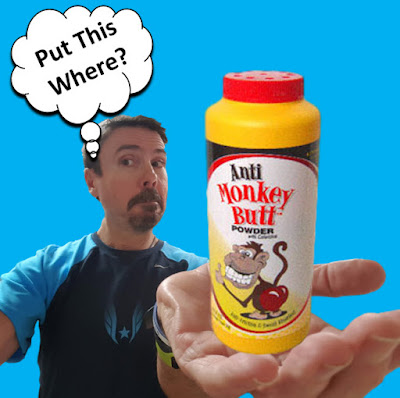 "Chafe." There, I said it. One of those words, no body likes. As soon as you hear it, you immediately
have a reference point in your memory of an oh-so painful run where you ended up waddling back to you car or even worse a blood curdling Psycho shower scene where you screamed at the top of your lungs during a post long-run shower, only to have your entire family running to your aide for sure thinking you've fallen in the shower or a snake has crawled in with you.

Almost every runner has experienced chafing at some point. If you haven't, I envy you greatly. In fact there is an entire industry devoted to anti-chafing products with quite creative names such as Body Glide, Squeaky Cheeks Performance Powder, Gold Bond Friction Defense, SportSlick, NipGuards, Hoo Ha Ride Glide, Boudreaux's Butt Paste, Anti Monkey Butt, and the list goes on. Many of the products target cyclists who have obvious chafing issues, but all the products work the same. Any athlete, no matter the sport, can use any or all of these products.

There's also the standard Band-Aids, petroleum jelly, and diaper rash products that work great too. Unlike normal petroleum jelly and diaper rash products, most of the anti-chafe products are designed without the goopy feel and most are designed not to stain your clothing (although some do a better job of that than others). Some of these products are similar in use and feel to that of a deodorant stick, others are creams, and still others are powders. They all work, but some are more effective and last longer than others. Aquaphor Healing Ointment by Eucerin is great to use on a chafed area after a run.

Band-Aids are often used by the guys to protect their nipples from chafing. Chafed nipples are extremely painful, if not for the runner, then for the spectators who think the runner has been the victim of a drive-by shooting. OUCH!! NipGuards work similarly to Band-Aids, keeping the nipple covered and protected from abrasive fabric. I had a hilarious incident using band aids in a race once. I found these waterproof circle adhesive bandages just the right size. So, I bought the box, pleased with how much money I had saved. They applied perfectly and the adhesive was great. They weren't goin' nowhere. So, I'm running the race, and I notice my shirt protruding at the chest. I'm in the heat of the race, and I'm not in pain, so I continue and don't give it another thought. That is until after the race. When I finished, my chest was really protruding. I took my shirt off only to find that the waterproof bandages did their job perfectly. They were so waterproof that all the sweat inside the bandage got trapped. I had two nice balloon pasties! Now that's a memorable chafe-free run!

So, what causes chafing? There are several things that can set a runner up for chafing. Chafing can result from skin-on-skin contact (very often happens along the inner thigh) and it can result from skin-on-fabric contact (this often is the cause of chafed nips for guys and for ladies chafing along the upper torso and back from their sports bra rubbing their skin). Ladies, I know it's hard enough finding the right jog bra for you and then on top of that you have to deal with chafing issues. Be sure, like with your other running clothing, that your sports bra is made of a breathable technical fabric (usually 100% polyester or a mix of polyester, Lycra, and or spandex.) Test out any or all of the aforementioned anti-chafing products on the areas that seem to be prone to chafing. Body Glide actually makes a Body Glide for Her that is designed for the sensitive areas around the bra line. If you're currently dealing with a chafing hot spot, but you still want to run, try using a product by Band-Aid called Band-Aid Advanced Healing Blister Cushions. You can apply this to the chaffed area and it will protect that area from additional chafing while on the run. These are also great for blisters on the feet.

Moisture often aggravates chafe-sensitive areas. Heavy sweaters may have more problems with chafing. A runner who normally doesn't experience chafing, may find they're chafed after a run in the rain or after a run when it's been extremely humid. New running clothes are often the cause of chafing. It's good rule of thumb to never wear anything new on a long run and definitely on race day. 100% cotton is another culprit. Cotton is awesome for casual wear, but for a runner it can be a chafe-trap. Cotton retains moisture. This moisture (along with cotton becoming a bit abrasive when wet) can cause terrible chafing where ever the wet cotton fabric is rubbing on the skin. Blisters on your feet? Check the cotton content of your socks. Socks, like your other running clothes, should be made of technical fabric.
Posted by RunnerDude at Thursday, August 10, 2017