RunnerDude's Fitness is so lucky and proud to be situated along one of the newest stretches of the Yadkin
and Atlantic Greenway in Greensboro, NC. The greenway is a part of an old railway (The Yadkin & Atlantic) that used to bring granite from Stokesdale, NC, into Greensboro. There's quite an impressive tunnel that was built underneath W. Cone Blvd.so runners, walkers, and cyclist could avoid having to cross 4-lane Cone Blvd. Granite-like blocks lead into the tunnel tying in the railway's history. Inside is a wonderful mural painted on both walls running the length of the tunnel as well as the ceiling that incorporates the native vegetation and animals as well as local landmarks. 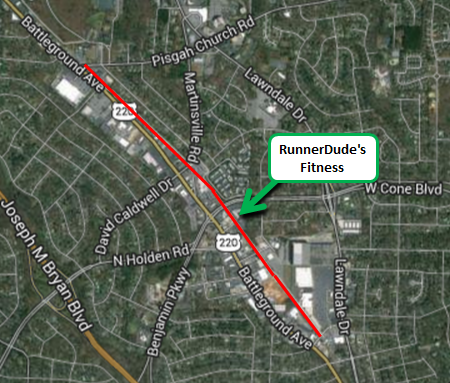 RunnerDude's Fitness has a kinship and sense of ownership towards this 1.5-mile strip of greenway that begins at the Pisgah Church Rd./Battleground Rd intersection (at the CVS) and running south parallel with Battleground. You may not have realized it's there, but it's behind all the shops on Battleground such as Papa John's, Stamey's, Rice Toyota, Taco Bell, Texas Roadhouse, and Office Depot. It emerges and ends in front of the Golden Corral at the Target shopping center on Lawndale. Eventually this stretch will connect with the downtown greenways. On the northern end of this strip, the greenway crosses over Pisgah Church Rd, and dips behind the Methodist church picking up with an older stretch of the greenway that runs all the way out past Bur-Mill Park, currently ending at a tunnel that's under construction at Hwy 220. From RunnerDude's Fitness, heading north you can easily get in a 13-mile out-n-back run. It's awesome!

Because of this kinship and sense of responsibility, RunnerDude's Fitness is in the process of adopting this stretch of greenway. We've had two clean-ups which is apart of the official process. The last clean-up was on June 22. We had an awesome group show up and we picked up quite a bit of trash.

Since that clean-up I've been very aware of the trash along the greenway. Kind of like when you buy that new car that you think is so special and unique and then after you buy it, you begin seeing it everywhere. Well, now every time I run the greenway, I'm very aware of the amount of litter scattered about. The past week or two, I've noticed quite a bit of trash in the tunnel. So, today I slipped on some rubber gloves and grabbed a 30-gal trash bag and headed out to clean up the tunnel. Trash trailing out of the tunnel along the greenway kept me moving north picking up litter. An hour-and-a-half later, I returned to the studio with that 30-gal bag completely full. I was dismayed and saddened. How could that much trash have been left since June 22. It's not even been one month. Also, the group clean-up on June 22 (see picture above) covered the entire 1.5-mile stretch of greenway from Golden Corral to CVS. My clean-up today covered only the mile from RunnerDude's Fitness to CVS.

What did I find? Just about everything. I found the expected beer cans, beer bottles, and cigarette butts,
candy wrappers, fast food containers and Styrofoam cups. Some of the debris you could tell was from some of the area homeless population, but I was very disheartened to find Gatorade bottles and GU wrappers. I also, picked up nicely tied up bags of doggie poop (these had been there for days). I'm not thinking that the homeless population bags up their critters' poop.

Reaching  CVS, my 30-gal bag full, I turned and headed back to the studio. On the 1-mile walk back, I collected a few pieces of trash I missed. Then something white caught my eye about 200ft down the greenway. As I got closer, I realized it was a CVS bag of trash that someone had discarded in the middle of the greenway within the few minutes since I had just been in the area. My heart felt heavy as I picked up the bag and added it to the rest of the trash I had collected.

Greensboro is so lucky to have more than 90 miles of greenways and trails networked together for everyone to enjoy. Let's encourage everyone to play a part in taking care of this treasure.
Posted by RunnerDude at Sunday, July 20, 2014