No need to be a fair-weather runner, but runner's do have to take caution in 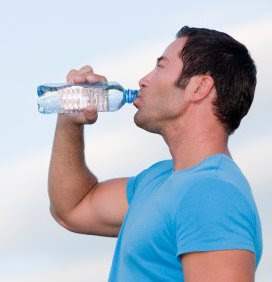 extreme weather conditions particularly in the extreme cold and heat. This time of year, heat is the big concern to many.

One of my runners was recently visiting death valley and it was 120° F. There was practically no humidity. After being in the sun for quite a while he noticed he wasn't sweating. He licked his arm and to his surprise, it was very salty. Because of the high temperature and low humidity, his sweat was evaporating as soon as it surfaced on his skin, leaving traces of salt, but no sweat. Kind of a cool science experiment, but could be a huge danger to a runner.

Most of us relate hydration to sweat loss and we gage that by how sweaty we are and how wet our clothes are becoming. Running in my native North Carolina climate, there's no doubt I'm losing a lot of water, because I sweat profusely, basically standing still. I literally can wring my running clothes out after a long run. Someone running in a very arid climate won't have this visible gage of sweat loss, so he/she will have to be diligent in hydrating well before, during, and after running.

The sweat test is a great way to monitor how much water you're losing through sweat. It's not uncommon for a runner to lose several pound due to water loss (sweat) during a long run. To get a handle on how much you're losing and how much to replace,  I recommend doing the sweat test below on a mild day and on a very hot/humid day so you can get a feel for how much water loss you experience on each type of run. Then on subsequent similar runs you'll have a good idea of how to hydrate and rehydrate.

Sweat Test:
1. Record the temperature of your run.
2. Weight before running (without your shoes); record your weight.
3. Run for 60 minutes.
4. Weigh immediately after running (without your shoes); record your weight.
5. Calculate the difference of the two weights; record the difference.
6. Each pound lost = 16oz of fluid lost during your run.
7. Over the next couple of hours ingest 16oz of water (or a combination of water and sports drink) for each pound lost.

Runner's World's 8 Rules of Fluid Replacement are also great tips to keep in mind for keeping you well hydrated during the hot summer months.

1. Drink Early and Often--Drink water or other low-calorie fluids in small, steady quantities throughout each day. If your urine runs clear when you void, you're well hydrated. Being well hydrated throughout the day not only benefits your running, it helps keep you more alert during the workday and can help prevent that dull, headachy feeling that can slow you down during the middle of the day.
2. Fortify Yourself With Fluids Before and During Your Run
3. When Running Long, Use a Sports Drink.
4. Don't Wait Until You're Thirsty to Start Drinking--By then it could be too late. Also, as we age, our thirst mechanism doesn't work as well, so you may actually be thirsty but your body isn't giving you the signals as quickly as when you were a young whippersnapper.
5. Don't Drink Too Much--The rate at which fluid is absorbed into the system varies from person to person. Factors include size, gender, age, metabolism, etc. If you feel or hear sloshing in your stomach, its telling you it's full, and you don't need to drink for a while.  For others over-drinking symptoms surface as cramping or feeling nauseated. If you feel any of these and you've been drinking a lot, stop drinking for about 15 minutes. If you're only drinking water, that sloshy feeling can be due to depleted sodium stores. Sodium works as the transport system that gets the water molecules out of the stomach and into the body. If the sodium stores are depleted, the water can become trapped in the stomach and have no means of transportation to hydrate the body. It's important to drink sports drink or use electrolyte replacement tabs if running more than an hour to keep from depleting your sodium stores.
6. After Your Run, Drink Between 16 and 24ozs of Sports Drink for Every Pound of Body Weight You Lose During Exercise.
7. Beware of Hyponatremia, a Potentially Fatal Condition Caused  by Taking in Too Much Water and Too Little Salt. (see the end of #5).
8. Be Careful Out There--The better your overall condition, the better you'll be able to cope with low or moderate degrees of dehydration. (Case in point: In the 1984 Olympic Marathon, Alberto Salazar lost 8.1 percent of his body weight in sweat, and still ran a 2:14.) But if you feel yourself slipping into fluid debt with  symptoms like--chills, dizziness, disorientation, and cessation of sweating--don't panic. Stop running, find shade or an air-conditioned building, and start drinking as soon as possible. If you don't quickly improve, ask for help or call 911. If you do start to feel better, resist running and walk or ask for a ride home. This is a great reason for running with a buddy.

For all you hard-headed runners who think water is for sissies, then take heed...performance starts to decline when you lose 3% of your body weight in sweat. That's 4.5 pounds for a 150lb person.

Drink up! Water does a runner good!
Posted by RunnerDude at Monday, July 22, 2013