Most Beautiful Colleges for Runners 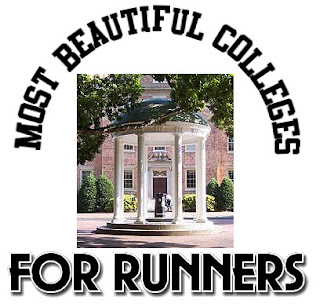 Ranking colleges is always difficult, but definitively ranking them based on something as subjective as beauty is impossible. Bearing in mind that every true and loyal alumnus/alumna thinks his or her school is the best, we made our picks for the 14 most beautiful college campuses for runners. We did our best to pick from all four geographic regions of the country, and we assumed optimal weather conditions (you’re welcome, northeast). Here are our picks, in alphabetical order:

What is your favorite College Campus for running?
There are tons of schools across the country with awesome campuses for running. Some small, some large. Be sure to leave a comment and let us know about about the great colleges in your area that offer great routes for runners.

Cast Your Vote! If so inclined, a vote of support for RunnerDude's Blog at The Top 100 Running Sites would be greatly appreciated. Thanks for your readership!

Posted by RunnerDude at Thursday, January 12, 2012

Interesting. Have you ever been to the campus of Rice University in Houston?

ECU in Greenville has some nice trails and is runner and walker friendly. My brother goes there now and I visited during Christmas. Take care. Oh, I will be doing the Outer Banks Marathon in November.

Terrific post. I would have to say that running across one campus was the most beautiful place called Smith College in Northampton, Massachusetts.

Hi Miche! Excellent point. I agree! Beautiful campus and just down the road a bit from me!

Hi Bert! No I haven't. Does it have a beautiful campus too?

Hi Kenley! Yep, you pointed out another great NC campus. My sister-n-law and niece are ECU Pirates! Wake Forest in Winston-Salem is another great runnin campus. Part of he Mistletoe Half Marathon runs through it's campus.

My first marathon ran through the University of Texas -one of my all time favorite 2+ miles in a marathon ever! Plus, my dad ran that portion with me-added bonus!
Christie

Florida Southern...are you referring to the trail around Lake Hollingsworth? Great running spot! My favorite!

I went to the University of Virginia... and it is where I first started to love running... It was and is beautiful! But man, I don't miss those HILLS!!!

I spent this past summer at UCSC, so I was very pleased to see it on your list - and you are right! The trails there are terrific (and the perimeter of campus offers some great hill-training opportunities).

Indiana University in Bloomington Indiana is a wonderful and beautiful place to run. Looking forward to doing my next half marathon in B-town this spring.