My (Chris Hazzard's) first marathon was Los Angeles 2011 (only 6 months ago!). Prior to training for LA, I was not a runner; I was a guy who occasionally ran short distances for exercise and didn't enjoy it. In fact it was painful. I would go on a running kick, and jog two or three days a week for a few weeks and then fall off and not run (or really exercise at all) for months on end. When I did run, it was never more than two or three miles, which when you are not a runner, is just long enough to make you really not want to do it. 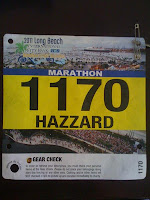 This all changed (slowly, mind you) last October when my brother-in-law, Geoff, threw out the idea of running the LA Marathon together in March. He had run the Honolulu marathon a few years before and had been wanting to run another, and he knew that I was interested in running one. Now, when I say 'interested' I mean that in the vaguest of ways. It was something I thought about as a bucket list item. I knew many people who had run a marathon and figured at some point I would too. That was it. Though nervous at first, with Geoff's encouragement I began training. We used Hal Higdon's Novice 1 program and once the running became routine, I started to enjoy it. Something about the challenge of pushing toward a goal that I wasn't sure I could conquer really drove me.
When the day of the marathon finally came I was nervous but extremely excited. The camaraderie and excitement of everyone waiting in the coral at Dodger Stadium was contagious. The weathermen had predicted rain and as of that morning it was overcast but holding off. Cloudy and cool, the day seemed perfect. The announcer said the gun would go off in two minutes. And that's when it started. The rain. It had held off until now, two minutes before the start of the race. On cue the entire crowd let out one unison groan - there's something amazing about 19,000 people all sharing a reaction. On top of the weather, Geoff had hit the insane marathon traffic getting off the freeway and didn't make it to the start by the gun, so I ran without him knowing we'd find each other on the opposite side of the finish line.

When the gun went off we finally started moving and I couldn't believe it was actually happening; I was running a marathon. The rain was steady but not unmanageable, however that didn't last. The steady rain quickly turned into a downpour. DOWNPOUR. The type of rain you try to avoid driving in. For the first ten miles I took care to not step in puddles thinking I would be able to keep my feet fairly dry, however this became a ridiculous exercise. Somewhere between miles ten and eleven I ran through a river on Hollywood Boulevard and gave myself over to the fact that I was going to get wet.
This was a turning point for me. The first ten miles had been fun, but as soon as I let go of any concept of what dry was the race became a lot more fun. This was good, because the rain somehow got worse. Around the halfway point it hailed for a brief period (at least I think it was hail - it hurt like hell). Yet the attitude of the people I was running near was not put off by the weather at all. Instead we saw it as a challenge. When the rain would pick up there would be loud screams of delight like cheering for your favorite band, and sometimes even laughter. At several points I saw others look to the sky and say, "Is that all you got?" The experience was incredible.

I finally crossed the finish line with a time of 4:43:06 and an incredible feeling of accomplishment. My first marathon redefined what it meant to be wet and the horrible weather only added to my overall high of the race - I knew I would never forget it.

The best thing to come out of my first marathon is that I am now a runner. I caught the running bug, big time. A few months after LA, in July, I ran the San Francisco marathon (this time actually getting to run with Geoff and we both set PRs! 4:29:46) and I just completed the Long Beach Marathon (my third), which was on October 9th. Running has grown to become something I love, it's my time to think, to set goals and to push myself. I've got a lot more marathons in me, but I will definitely never forget my first, LA 2011.
Posted by RunnerDude at Monday, October 17, 2011

Wow! Congratulations on all those marys this year, but especially your first one.

I loved this story! I am running my first marathon, the Marine Corps, in 2 weeks. Your story really helped. If its okay, I am going to put a link to it on my blog, momanddadtrackstars.blogspot.com. Thanks!

Glad you liked it and good luck at the Marine Corps in two weeks! Thanks for linking to the story!

This story is by my brother-in-law. There was never any doubt in my mind that he would actually do this, Chris accomplishes everything he sets his mind to and more! However, I don't even think he realizes how his excitement has rubbed off on the rest of us. His older brother and I have been running, not consistently enough to run a marathon, but still running. Even as a teen at my most active, I never ran or even wanted to run, but Chris made the "runner's high" seem so worth the effort that I had to give it a try. Chris, you are an inspiration!

I have a friend that ran it as well and she said the weather was psychotic. She was near one guy who succumbed to hypothermia and was very very ill. If you can run through that weather then your definitely hooked!

Way to go Chris. You da man. You make a father very proud!!