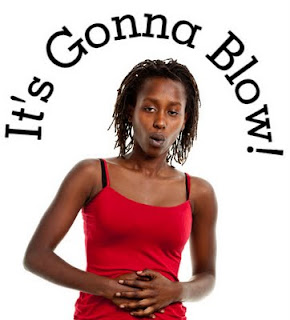 From time to time most runners will experience some type of stomach distress while on a run. The causes of stomach distress while running are many. Anyone can be caught off guard by the lunch that didn't agree with them or the stomach bug that's been going around the office. That type of distress, usually means a trip to the rest room and maybe a day or two laying off the running until the ole tum tum gets to feeling better. While other stomach issues may be the reoccurring type that can really affect a runner's performance on an ongoing basis.

Below are several common stomach distress issues experienced by runners as well as a few recommended remedies. The remedies may not work for everyone, but they may be worth trying just in case it's the "cure" you've been looking for.


Nausea #1—While running, blood goes to the parts of the body where it's needed most....the legs. When this happens, the lining of the stomach isn't receiving its normal blood flow causing an overload of stomach acid resulting in the runner feeling nauseous.
Remedy: Taking an antacid such as Tums, Rolaids, or Maalox prior to your run may help neutralize the acid.

Nausea #2—You don't want to feel stuffed, but neither do you want to feel starved on a run. Running on an empty stomach can cause nausea that comes when the hunger pangs kick in.
Remedy: Eating a 200-400 calorie snack about 1.5-2 hours prior to your run can provide you with the needed energy to sustain your run as well as keeping the hunger pangs at bay. The snack should consist of mostly complex carbs and a little protein. For a short run the 200 calorie range will do. For a long run or a more intense workout such as hill repeats or intervals, the 400 calorie range will do.

Nausea #3—Carbs are the fuel needed for energy production. However, like most things...too much of a good thing can be a bad thing. Today we're bombarded with sports drinks, gels, chews, beans, wafers, shots...the list goes on and on. All the ads make it seem like you need a constant influx of carbs while you run. You do need properly fuel your body before, during and after your run, but your body is pretty miraculous. Your liver is able to store about 2000 calories of glycogen (carbs). If you're eating a diet rich in complex carbs on a daily basis, then chances are you're doing a pretty good job of keeping those glycogen stores full. Those 2000 calories will provide for about 18-miles worth of energy before the stores are depleted. The trick is not letting the stores get too low. Runners that let the stores become depleted run the risk of bonking or "hitting the wall" on those really long runs. However, that doesn't mean downing a GU every 20 minutes. Ingesting too many carbs too frequently can cause stomach cramps. Washing down a concentrated sports gel with 6-8oz of water instead of sports drink can help the body absorb the carbs without overdosing on carbs. When you overload your body with more carbs than it needs, you can cause your body to release too much insulin causing a "yo-yo effect" with your blood sugar resulting in nausea.
Remedy: Eat a 200-400 calorie snack of complex carbs about 1.5-2 hours prior to you run. During the first 45-mins to 60 minutes drink water. After this length of time begin drinking sports drinks to provide the needed carbs and electrolytes. About every 45-60-minutes take a gel (if desired), but be sure to wash it down with water not sports drink. Be sure to test different combinations of sports drinks and gels. Some runners, may find that a sports drink with carbs and electrolytes will be enough to sustain them on a run. Others may find a combination of sports drinks and gels work. While still others may find that a sports drink and solid food like pretzels work best for them. Be sure to do your testing well before race day.

Stomach Cramps/Indigestion—As mentioned in Nausea #1, the body diverts blood flow to where it's needed. Running shortly after eating slows the blood flow to the stomach, which in turns slows or stops the digestion process. So any food eaten just prior to running will more than likely just sit in your stomach, go no where, and do nothing but cause stomach distress.
Remedy: Eat about 1.5-2 hours prior to your run.

Diarrhea—Loose bowels are pretty common amongst runners, especially on longer endurance runs. The cause can be anything from anxiety to diet.
Remedy: Try various relaxation techniques from meditation to yoga to help relieve stress and anxiety prior to a race. If you're traveling to a race, try to arrive at least two days prior to race day. This will give your body time to adjust to its new surroundings. Also, you'll be less stressed about finding the race expo, the starting line, etc.  Eat high-fiber meals about 2-3 days out from race day. This will help stock your carb stores and give the high-fiber foods time to pass through your system prior to race day. Switch to more simple carbs the day before and morning of the race. Avoid foods that cause peristalsis

Sloshing Stomach—Ever feel like you're drinking a lot on a run, but the water just stays in your stomach sloshing around? Sodium is one of 5 electrolytes needed by the body to help keep things in balance. Sodium plays a vital part in hydration and water balance in the body. On long and/or really hot runs, you can actually deplete your sodium levels through sweating. Once depleted, your body has no way to transport that water sitting in your stomach to the rest of your body, so it just remains there sloshing around.


Remedy: Drink water for the first 45-60 minutes of a run, but then switch to a sports drink containing electrolytes. Also, be careful not to overhydrate the day before the race. If you're drinking too much water the day before, you can run the risk of flushing out your electrolytes before you ever get to the start line. Drink throughout the day before the race, but just not to excess. Also, eating salty foods such as pretzels along with the water can help to ensure good sodium levels on race day.

Great post! Covers all of the stomach troubles runners have!