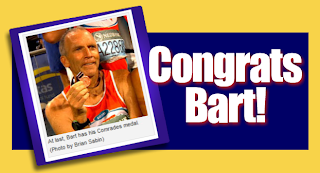 A couple of weeks ago I had the privilege of interviewing Bart Yasso for the blog. In the interview he shared about the one run that had eluded him—Comrades—one of the world's top ultradistance races between Durban and Pietermaritzburg in South Africa.

I had heard of Comrades, but really didn’t know a lot about the race until I read Bart's book My Life on the Run. It’s a 56-mile point-to-point marathon in South Africa. Actually it’s approximately 56 miles. One of the unique things about the race is that the actual distance can vary from year to year. It’s truly a point to point race, but where the actual finish is located can vary and as a result so can the total mileage. It’s a grueling course that reverses direction each year. So, one year it’s more of an up-hill race and the next it’s more of a down-hill. But, even on the down-hill year, there are some pretty major hills to climb. The race takes place between the cities of Pietermaritzburg and Durban and the race has a very strict 12-hour cut-off. They actually shut the gate at 12 hours and no one is allowed to cross the finish line after that time.
During the interview, Bart said that he had run over 1,000 races in his career, and he didn't want to end his running career without adding Comrades to his list. The race originally had an 11-hour cut off. Today it has a 12-hour cut off. Bart shared that he wanted to try and make the 11 hour time. He wasn't sure if it was possible. If not he was shooting for coming in under 12. And if that didn't happen, he said that at least he'd have the satisfaction of knowing he had tried.
Well, this past Sunday, Bart completed Comrades in a time of 11 hours, 33 minutes, and 37 seconds. He placed 11,428th out of 20,000 runners overall, and 9,071st among male finishers. Congrats Bart!! You're amazing!
To learn more about Bart and his quest for Comrades check out the Bart vs. Comrades video series at the Runner's World website.
Posted by RunnerDude at Tuesday, June 01, 2010

I love it that you highlight other runners successes.

I love Bart! He is awesome and I am so happy to hear he met this challenge!

Thanks for posting this...I am such a Bart fan...

I saw this on facebook and it made me so happy. Glad he got it done :D