A Runner and A Soldier

A fellow Athlinks member, Nathan Hangen, recently responded to an email about the blog that I sent to some North Carolina Athlinks members. In his email, he mentioned maybe seeing me at an NC race when he returned. Wasn’t sure what he meant by “when he returned.” I saw on his Athlinks profile that he too had a blog, The Triathlon Man. So, I checked it out and realized that he was in the Army and is currently stationed in Afghanistan. Wow! The internet is amazing. One email and I’ve got a reader halfway across the world. While helping to keep our country secure, Nathan has managed to continue if not further his running. Nathan’s story is so motivating that I asked if he would mind sharing it with you. 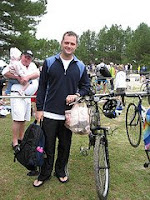 My name is Nathan Hangen and unfortunately I just turned 30 years old, which scares me to death. Long ago I had watched the Ironman Championships on TV and promised myself that someday I would give triathlons a shot. Years later, I had found myself caught in the daily grind and was out of shape and overweight. Even though I joined the army in 2006, I still hadn’t really found any purpose in life and was living without any of the passion or desire that I was so proud of as a teenager. Once I turned 29, I hit a low point in my life and realized that I’d let so many of my goals and dreams go down the drain without so much as a fight to keep them alive. During some Army training, I met a friend that was a great track athlete and he convinced me to start running with him.
Within a few weeks, I had gone from doing interval workouts once a week, to running 3-4 miles at a time several times per week. There was something about running on the open road that re-invigorated me with purpose and I started changing more than one thing in my life. I stopped drinking so much, I started working out, and I stopped wasting time on trivial things and working on my own business. Although running became my newest addiction, there was a primal instinct activated in the process that fueled everything else in my life.
With the encouragement of my friend, Gabe, I signed up for a 5k on St. Patty’s Day in 2008 and trained my butt of for it. I only ran a 23:02, but at the time it was the fastest I’d ever run and I was hooked on races. I started doing a 10k every other weekend and as my times improved, I started to feel the calling towards that triathlon I promised myself so long ago. I signed up for the Woodlake Triathlon and had the best time of my life.
I deployed to Afghanistan in August of 2008, which put an abrupt halt to my triathlon and 10k training until I realized that I’d have an excellent opportunity for some great high altitude training that I couldn’t get in NC. I started hitting the weights 3-4 times a week and as I adjusted to the altitude my runs moved from 2 miles, to 8 miles. I worked up to about 20 miles per week outside and on the treadmill while continuing to work in 3,000-4,000 yards in the pool and about 75 miles on the bike per week. Right now, I’m using between 10-14 sessions to achieve 20-30 miles per week on the treadmill, 100-150 miles per week on the bike, and 3-4 weight training sessions. The pool is closed for the winter, but I’ll be ready to hit it when it re-opens.

My typical runs are between 4-8 miles and I rotate between 1 mile intervals, tempo runs, and distance runs. On the bike, I spend most of my time at a fast pace over long distances trying to get my speed and stamina up at the same time. In the pool, I was alternating distance workouts with slower form sessions mixed in with interval sessions. As far as the weights go, I’ve always been a huge bodybuilding fan and I still go with the Chest/Tri’s, Shoulders/Bi’s, Back, Legs method. I’m the strongest and fastest I’ve ever been.
I’m currently maintaining the same schedule, but working on speed as I try to get ready for the North Carolina Triathlon Series. I’ll be returning in April 2010 and looking forward to see how the high altitude training has paid off. I’ve been able to achieve the same times here that I had in the US, so I expect to be able to shave minutes off of my running times and probably 20-40 seconds off of last year’s sprint times.
I don’t plan on stopping at the local level either. In fact, I plan on moving on to 70.3 HIM’s starting with the Augusta HIM in Fall 09 and eventually going to the full Ironman in 2010. My goal is to prove that anyone can become a professional Ironman as long as they are dedicated and willing to bust their ass. My friends here in Afghanistan are more than supportive and I’ve almost convinced them to join me during the race season…almost. To be honest, I’m so ready to race that I’ll drag them on my back if I have to. I just can’t wait.
Thanks Nathan, for sharing your story. I look forward to running a race with you in 2010!